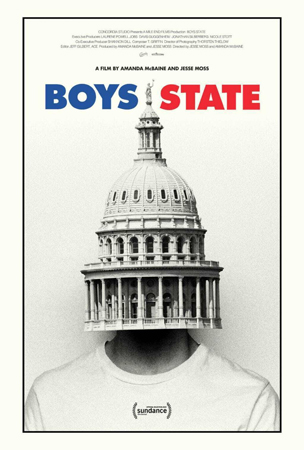 Scared about our political future? Boys State, the punchiest documentary so far this year, offers flashes of hope. And who will lead us out of bondage, you ask? Teen boys – 1,100 of them; their average age is 17 – who have gathered for an annual leadership conference run by the American Legion since the Thirties.

The event offers invitees the chance to split into rival political parties and try to prove they can run a government better than the old farts doing it now. Previous entrants include Bill Clinton, Dick Cheney, Samuel Alito, and Cory Booker. A Grand Jury Prize winner at Sundance 2020, the doc sold for a whopping $12 million to A24 and Apple, where you can stream it starting August 14.

Married filmmakers Jesse Moss and Amanda McBaine chose the summer of 2018 to document the campaign action in Austin, where the boys are divided into two fake parties – the Federalists and the Nationalists – and go at one another over electing a leader. It’s a microcosm of the political discontent polarizing America. Moss and McBaine accumulated 42 terabytes of footage that editor Jeff Gilbert had only a year to turn into a gripping two-hour film, both sweeping and intimate. Mission accomplished. “I’ve never seen so many white people – ever,” says Rene Otero, an African American teen from Chicago with a maverick personality and a flair for progressive oratory that wins him the Nationalist Party chairmanship, at least until impeachment proceedings are lodged against him. For the Federalists, the chair goes to Ben Feinstein, a double-amputee from San Antonio with a passion for Reagan-era conservatism and no aversion to playing dirty. That puts him in line with Austin’s Robert Macdougall, a handsome football captain at war with his own convictions. Privately pro-choice, Robert lobbies against abortion; he’s already figured out that sometimes you have to stifle your ideological stances in order to stump for votes.

Married filmmakers Jesse Moss and Amanda McBaine chose the summer of 2018 to document the campaign action in Austin, where the boys are divided into two fake parties — the Federalists and the Nationalists — and go at one another over electing a leader

The moderate stance is represented by Houston’s Steven Garza. The son of an undocumented Mexican mother, Steven manages to include Bernie Sanders and Napoleon Bonaparte among his role models. An underdog in the race for governor, Steven is characterized as either “a liberal snowflake” or a “quiet voice in the storm.” One of his Nationalist rivals in the gubernatorial race publicly mispronounces Garza as “Garcia.” As with real-life politics, ethnicity quickly becomes a go-to campaign talking point.

Does that stop the usual male chest-thumping from seeping in? Restless boys suggest a bill on space-alien invasion and a statewide ban on pineapple pizza.

Though seven days of testosterone-fuelled anarchy never erupts into Lord of the Flies violence, the film bristles with heated debates over guns, abortion, immigration and LGBTQ rights. Partisan politics have been around since the Founding Fathers, and Boys State opens with a warning, from George Washington no less, about how political parties “subvert the power of the people.”

Can this future generation of Obamas, Karl Roves, and Trumps see beyond the self-interest required to get votes? It’s dispiriting to hear Robert, with his West Point aspirations, confess that “sometimes you can’t win with what you believe in your heart.” But even there, a sense of youthful idealism prevails. Instead of Hollywood-style pandering, Moss and McBaine accentuate boys who toss hand-me-down ideologies in favour of discovering what they believe for themselves. That leaves the two septuagenarians currently running for the nation’s top job playing catch-up with 17-year-olds willing to cross lines of race, class, and party to achieve consensus. Forget who wins or loses, Boys State is about that promise of change in the air. And it’s exhilarating.