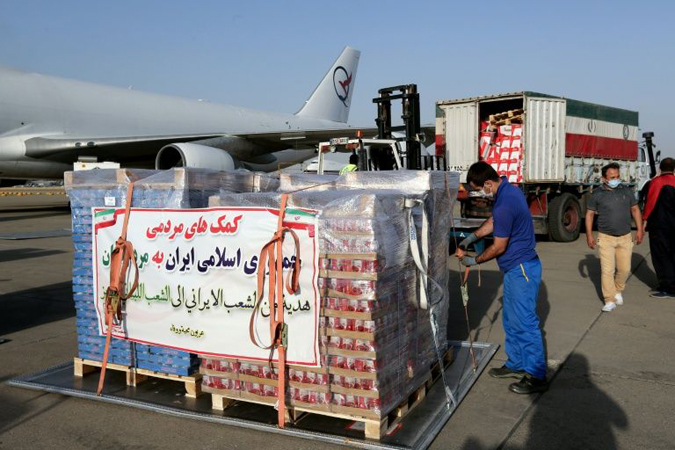 Iran is watching developments in Lebanon closely, wary of losing any of its hard-won influence after a deadly mega-blast in Beirut sparked angry demands for reforms to its delicately balanced system.

One week on from the chemical explosion that wreaked destruction across swathes of the Lebanese capital, the strategic eastern Mediterranean country is still reeling.

Lebanese have taken to the streets over the disaster that claimed at least 158 lives and injured 6,000, with many calling for heads to roll and for major changes.

While some protesters have chanted slogans against Lebanon’s powerful Iran-backed Shiite movement Hezbollah, most vented their fury against a wider ruling class whose corruption, incompetence and negligence they say caused the August 4 tragedy.

In Tehran, student members of Iran’s Basij militia gathered in front of the Lebanese embassy, lighting candles and waving the flags of the disaster-hit country and Hezbollah.

Many Iranians posted photos online of Beirut’s devastated port accompanied by poems for the city by Syrian writer Nizar Kabbani, who is hugely popular in the Islamic republic.

In another tribute, Azadi Tower, the symbol of the Iranian capital, was lit up in the colours of the Lebanese flag.

The day after the explosion, Iran’s supreme leader Ayatollah Ali Khamenei urged the people of Lebanon to show “patience”.

Khamenei sought to assure them that Iran would support Lebanon in the face of this “painful tragedy”.

“As always, Iran is fully prepared to render assistance in any way necessary. Stay strong, Lebanon,” the foreign minister tweeted soon after the monster blast.

Politically multi-confessional Lebanon is dominated by former warlords from its 1975-1990 civil war.

So when French President Emmanuel Macron called for major reforms to Lebanon, he was met with criticism in the Islamic republic.

“I think Mr. Macron’s views were interventionist, although the historical background of relations between Lebanon and France should also be taken into account,” said Ali Esmailzadeh, a student in Tehran.

“I think these words are to light the wick of the fire of unrest in this country, which seems to have started since last night,” he told AFP, referring to violent protests in Beirut on Saturday night.

Macron’s call, issued during a visit to Beirut in the wake of the blast, saw Iran’s ultra-conservative newspaper Kayhan accuse him of trying to “weaken the Lebanese resistance”.

The daily branded a French-hosted conference at which international donors pledged 250 million euros in aid to Lebanon on Sunday as a “bluff”.

Iran did not take part in the forum, but Tehran said Monday it has sent 95 tons of medical supplies to Lebanon and will continue to send more humanitarian aid.

“If they are honest, they should lift sanctions against the Lebanese government and people,” Iranian foreign ministry spokesman Abbas Mousavi said, referring to the United States.

For Kayhan’s editor-in-chief Hossein Shariatmadari, “Macron’s changes” meant “the elimination of Hezbollah” and the “rescue of the Israeli regime” — Iran’s main regional foe.

“In the name of Israel, Macron has sent a message to the Lebanese people that if they continue to resist and support Hezbollah, they will face another catastrophic event of this type,” Shariatmadari told AFP on the phone.

Analysts have expressed doubts about Iran’s ability to provide significant financial assistance to Lebanon as a result of its own economic woes.

Iran’s economy has been battered since its arch enemy the United States unilaterally withdrew from a nuclear deal in 2018 and reimposed sanctions.

Since February, Iran has also struggled to contain the Middle East’s worst outbreak of the coronavirus, which the government says has killed more than 18,600 and infected nearly 329,000.

Pro-reform journalist Ahmad Zeidabadi said that “in such a situation, Iran’s hands are tied, unable to do much” to help Beirut’s reconstruction.

“If Tehran had the financial means, we know what it would do, as it did during the (Israel-Hezbollah) war in 2006 when Iran compensated for heavy losses suffered at the time” in Lebanon, he told AFP. On that occasion, however, the government of then Iranian president Mahmoud Ahmadinejad “had a lot of money by selling oil at a high price”, he added.

Zeidabadi said this time Iran would be better off working together with European countries that are coordinating the reconstruction effort. “This requires a change in behaviour and vision for the regional positions of the Islamic republic… The situation as a whole is very complicated for Iran”.