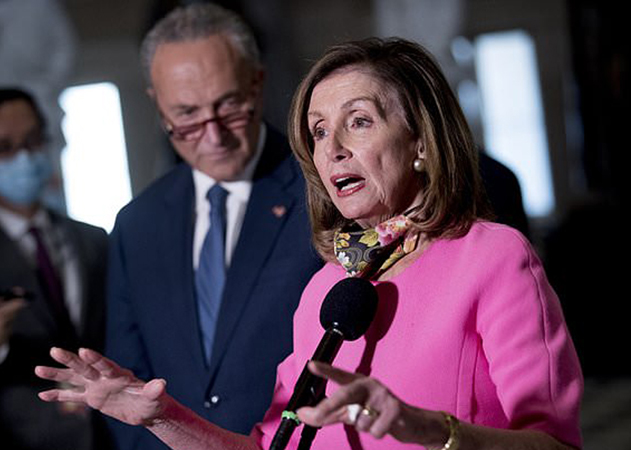 Speaker Nancy Pelosi is not about to blink. The Democratic leader has been here before, negotiating a deal with the White House to save the US economy, and lessons from the Great Recession are now punctuating the coronavirus talks. With Republicans again balking at big government bailouts, the Democrats believe they have the leverage, forcing President Donald Trump into a politically risky standoff over help for millions of Americans.

“It´s impossible to know whether she has overplayed her hand until we see if there is a COVID package,” says Michael Steel, a former top aide to then-Speaker John Boehner.

Monday brought no new talks between Trump’s team and negotiators on Capitol Hill as the president tries a go-it-alone strategy. Over the weekend, he launched a series of executive actions that give the appearance of a White House taking charge but may end up providing little help for ordinary Americans.

The president’s orders seek to reverse the devastating fallout from unemployment assistance, eviction protections and other aid that has expired. But there are limits, and legal pitfalls, in trying to make an end run around the legislative branch.

Pelosi dismissed Trump’s proposals Monday as an “illusion” in an interview on MSNBC.

Trump acknowledged he’s still quite open to a deal with Congress. “So now Schumer and Pelosi want to meet to make a deal. Amazing how it all works, isn´t it,” he tweeted Monday. “They know my phone number.” With Trump now having played his hand, however, Democrats appear in no rush to show theirs.

It will take days, if not weeks, to sort out what Trump intended with his executive actions, as guidance from the administration is sent to the states. Already, the Department of Labor is telling governors that Trump’s promised $400 weekly jobless benefit boost will actually amount to just $300 if states are unable to provide the rest, according to information obtained Monday by The Associated Press.

Senate Democratic leader Chuck Schumer dismissed the Trump’s administrative actions as “all sizzle and no steak,” held together by “spit and glue.”