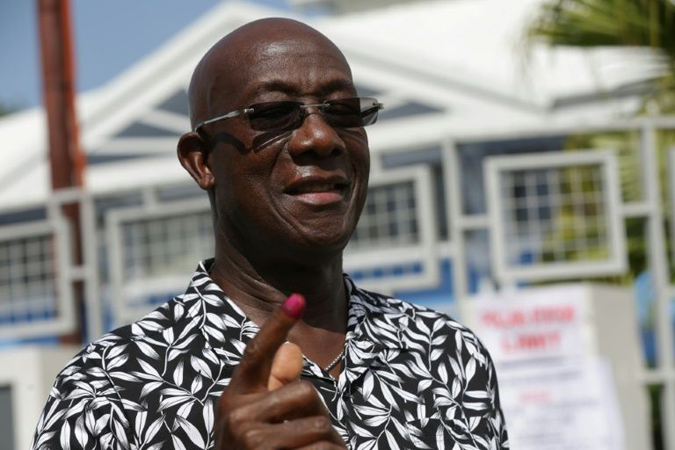 Scores of voters remained in line waiting to cast their ballots as polls closed but officials have said they will be allowed to vote.

Rowley urged supporters to stay away from the PNM party’s headquarters when celebrating.

“We do not want a good election campaign to be spoiled by large gatherings which can cause the spread of the virus,” Rowley said after voting.

“Celebrate in small groups at a friend’s home, as I know there will be reason to celebrate, but we must be responsible at all times.”

In the most recent opinion poll in the island nation off Venezuela, the PNM was five percentage points ahead of the opposition United National Congress (UNC), led by former prime minister Kamla Persad-Bissessar.

After casting her ballot, Persad-Bissessar urged voters not to be deterred by long queues and a process slowed by health safety measures.

“In some stations they are saying it is very slow,” she said.

“The feedback I am getting is that in some stations the turnout is very high but some people are turning back because of long lines. I just urge everyone: do your civic duty, cast your vote.”

For many of the one million voters, the coronavirus pandemic and corruption were two key issues on the campaign trail.

Rowley, in power since 2015, announced on Wednesday the closure of all primary schools after several pupils were infected.

But facemasks were not compulsory in ballot stations on voting day.

“Every election is important but I think this election is particularly important because it heralds a period… that is difficult for the country,” he said.