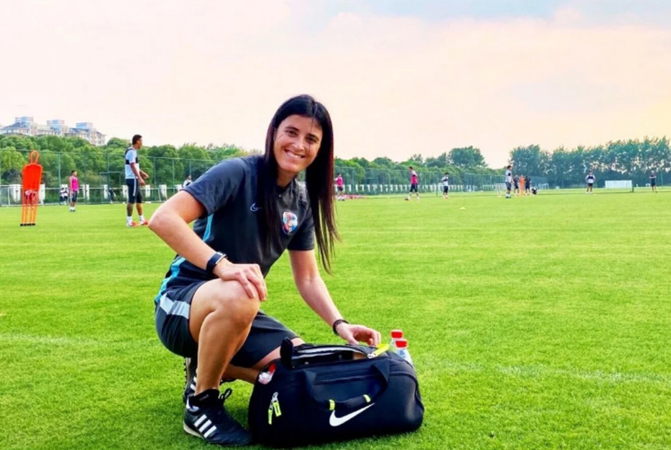 BEIJING: Erica Hernandez calls herself the first woman physio in Chinese professional football ––– but the Spaniard is certain that she will not be the last. Together with husband Jordi Escura, a former Andorra defender, they head up medical services at Chinese Super League side Qingdao Huanghai. Chinese media call them “the miracle-working medical couple”. But while women are slowly becoming more involved in men’s football, Hernandez is an incongruous sight in the male-dominated CSL. “I just want to say that what I’d love to see soon is that we are not treated as women or men working in certain positions,” Hernandez told AFP by email from Suzhou, where half the 16 CSL teams are in a “bubble” to ward off coronavirus. “I wish that we will all just be treated as professionals, without taking into account our gender,” added the 40-year-old, who believes that she is the only woman physio in the top two divisions of Chinese football.

“From my experience what the player wants is to recover sooner and better, he or she doesn’t care who treats them as long as you help them get what they want.” Hernandez, who has been with Qingdao for about five years after a stint in Thai football, is keen to stress that she has never faced any sexual discrimination at the club on China’s northeast coast. “Having said this, I know that there are some superstitions and traditions that discriminate against women, such as not being able to go to the same bus as the team or not sitting on the bench during the match,” she added. Hernandez names Eva Carneiro, who was the team doctor at Chelsea until 2015, as one of her inspirations. In 2016 Carneiro settled a constructive dismissal case with the Premier League club, who apologised “unreservedly” over her treatment, and she also reached a discrimination settlement with former manager Jose Mourinho.

Lorena Torres, performance director at the Philadelphia 76ers and also from Spain, is another Hernandez looks up to for the way she forged a career in the NBA. Hernandez believes that sometimes women place an extra burden on themselves because they feel they have to prove themselves. “It is because we want to avoid situations where somebody could just say, ‘If she was a man it wouldn’t happen,’” she said.

‘The time will come’: Hernandez’s place in Chinese football has come into sharp focus since the coronavirus-delayed season finally kicked off last month because Qingdao are newly promoted to the top division. The 16 CSL teams have been split into two groups, in Suzhou and Dalian, and they are not allowed to leave a designated hotel in each city to prevent contact with the outside world. The only time players and staff can leave is to train and play matches. That means Hernandez is living in an overwhelmingly male environment for two months straight. She denies it is claustrophobic or misses the company of other women, and says she is enjoying meeting staff from the seven other teams staying in the same hotel.

But she acknowledges that China is lagging some countries when it comes to women in sport and is looking forward to the day when she sees more female physios in the CSL. “What is happening in China is that this country needs more time to embrace this evolution and it will take longer to see the same reality that we are having in Europe,” she said. “But the time will come for sure.”