Chaos as PML-N workers and police clash outside NAB office 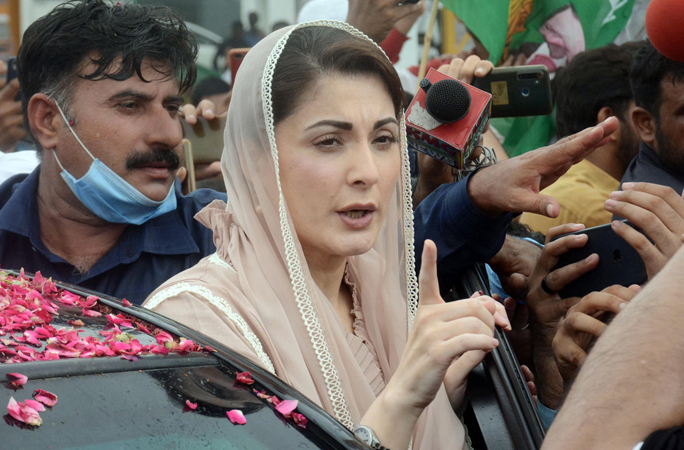 PML-N workers and police clashed outside the National Accountability Bureau’s office on Tuesday, ahead of party leader Maryam Nawaz’s visit to the anti-graft body’s office to record her statement in a case related to ‘illegal’ acquisition of land in Raiwind.

The scene outside the building turned violent when the PML-N leader’s caravan, which included several cars and hundreds of supporters on foot, reached outside the NAB premises on Multan Road. Television footage showed men in plain clothes pelting stones at law enforcers, who were also seen assaulting some PML-N workers with batons, water cannons and tear gas. Several television channels also showed footage and pictures of cars, purportedly part of the PML-N caravan, laden with bags full of stones.

The clash ensued when police tried to stop PML-N workers who were trying to remove barricades outside NAB’s Lahore office. NAB officials conveyed to Maryam that it was not possible to record her statement due to the deteriorating situation outside the Bureau’s office.

After the clash that ensued for quite a while, the PML-N leader held a hard-hitting press conference, where she condemned the government and said that it was ‘scared of PML-N’s rising popularity’. In a video that she posted on Twitter, Maryam alleged that police pelted stones at her car which cracked her bulletproof vehicle’s windshield. In a tweet, the PML-N leader accused police of firing tear gas shells and baton-charging party workers.

In another video she posted on Twitter showing the cracked windshield of her car, the PML-N leader said, “Pelting stones at my car, police have broken its windshield. This is a bulletproof car and police are pelting stones and shelling [PML-N workers] in front of NAB’s office to instigate workers,” she said.

Flanked by PML-N leaders, Rana Sanaullah, Shahid Khaqan Abbasi, Marriyum Aurangzeb and others, she called the incident an act of ‘state-sponsored terrorism’ witnessed by her personally. “Not for me or the PML-N, it is a moment to ponder for the ‘fake and selected’ government,” she said, adding that the unarmed party workers present near the NAB office were shelled with tear gas and baton-charged. “I saw for the first time stoning and tear-gas shelling but the workers remained steadfast,” she said.

Quoting former Punjab law minister Rana Sanaullah, she said that the party will provide legal assistance to the arrested and detained workers. Calling the guards ‘unsung heroes’, the PML-N leader said she could not initially ascertain where the stones were being hurled from, adding that she narrowly escaped a head injury or similar accident.

“Pervaiz Rasheed was in the car with me. He told me that it was a bulletproof car otherwise the stones and bricks would have hit my head,” Maryam said, adding that the NAB after calling her told her to return after the scuffle broke out.

Referring to JUI-F chief Maulana Fazlur Rehman’s upcoming all-parties conference, she said that former prime minister Nawaz Sharif had instructed the party leadership to cooperate with other opposition parties to present a united front. “If Maulana sahab has any reservations, the PML-N will remove them. So there is no need to worry about this,” she said.

In a press release, NAB Lahore said that it had summoned the PML-N vice president to hear her stance on the case registered against her. However, the Bureau alleged that PML-N workers pelted stones and were involved in ‘hooliganism’ at the time of her appearance. NAB said that it had been treated like this for the first time in the 20 years since the Bureau had been created, stating that its building’s windows had been broken and staffers injured. It announced that proceedings against Maryam had been postponed and it condemned PML-N workers for interfering in legal matters in an ‘organised’ way. The Bureau said that it will register FIRs against PML-N representatives and leaders for interfering in the legal process.

PPP Chairman Bilawal Bhutto Zardari tweeted in support of Maryam, condemning the ‘use of force’ against her and PML-N party workers. “Condemn the unnecessary use of force, teargas and stone pelting on Maryam Nawaz Sharif and her party workers by police in Lahore,” he tweeted.

The Bureau has accused Maryam of receiving 200 acres of what was supposed to be government land in Raiwind. The sources said that the transfer was done during DC Noor-ul-Amin Mengal and former DG LDA Ahad Cheema’s tenure. NAB had also summoned Mengal along with the LDA officials of that time with records, sources said.