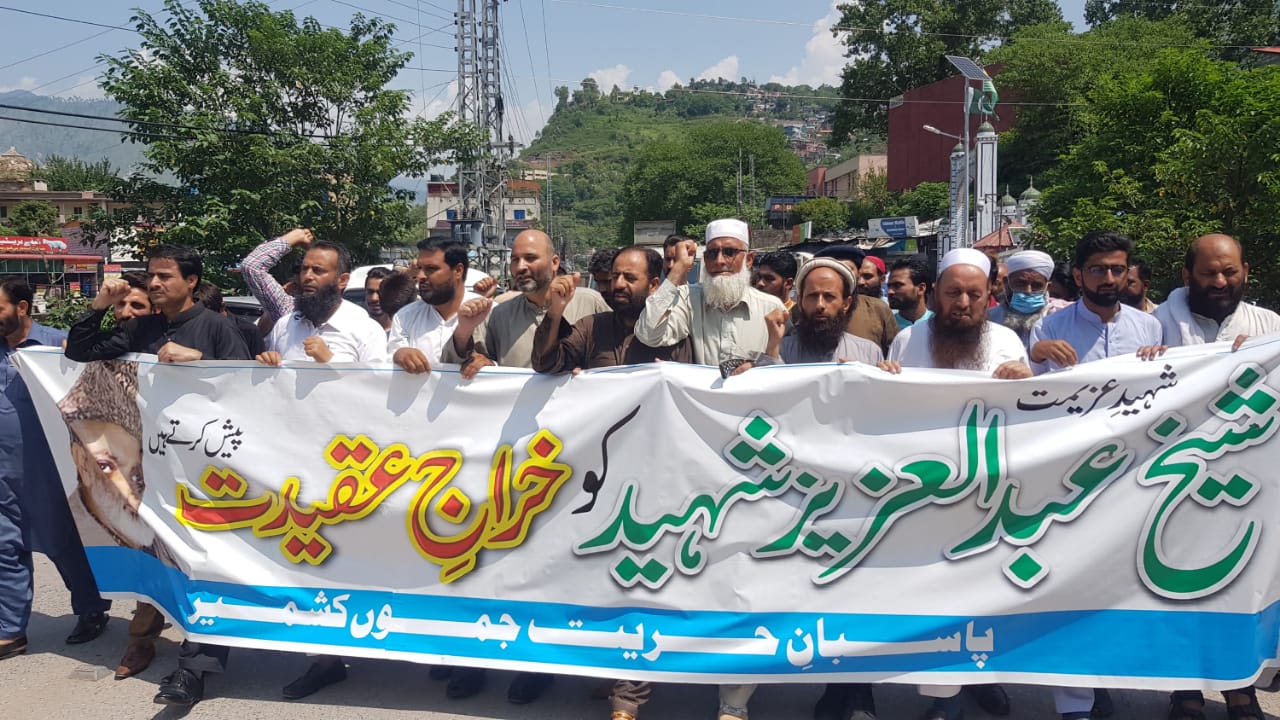 Muzaffarabad: A rally was staged under the aegis of Pasban-e-Hurriyat Jammu Kashmir on the occasion of 12th martyrdom anniversary of Sheikh Abdul Aziz.

People in AJK commemorated the day as “Youm-e-Istaqlal” here on Tuesday.

Protestants in the rally were chanting Anti-India and pro-freedom slogans.

They were holding banners and placards stated tributaries to martyr Sheikh Abdul Aziz.

While paying rich tributes to the martyr, speakers said that the struggle of Sheikh Abdul Aziz was exemplary in history.

They reiterated that the Sheikh endeavored in his whole life for bright future of Kashmir besides freedom from Indian Occupation.

“He devoted his life for the freedom movement” speakers maintained.

The speakers said that on August 11, 2008, when violent extremists in Jammu boycotted millions of people in the Kashmir Valley, Kashmiri businessmen and students were attacked.

They stated that Sheikh Abdul Aziz called to migrate for Muzaffarabad and when massive gathering started marched towards AJK, Indian armed forces opened fire on the unarmed people in which 13 civilians including Sheikh Abdul Aziz got martyrdom.

The speakers termed the great sacrifices of the martyrs of Jammu and Kashmir, including Shaheed Abdul Aziz, as unforgettable struggle and said that the martyrs are the assets of our nation.

The speakers said that the Kashmiri nation has sacrificed its young sons against the state oppression and military colonialism of India.

The speakers vowed to fight against Indian aggression on all fronts. Rally participants marched from Burhan Wani Chowk to Gharipan Chowk and prayed for the high ranks of Shaheed Sheikh Abdul Aziz and other Martyrs of Jammu and Kashmir.