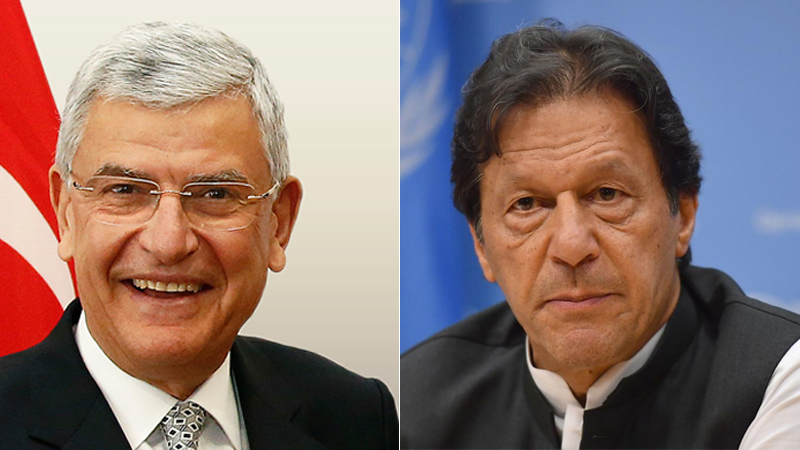 Prime Minister Imran Khan on Monday stressed that the United Nations must play its rightful role in addressing the grave situation in the Indian Illegally Occupied Jammu and Kashmir (IIOJK) and ensuring that Kashmiris exercise their right to self-determination, promised to them in the relevant UN Security Council resolutions.

During the meeting, he apprised the PGA-elect of the serious situation in the IIOJK, an issue that was on the agenda of the UN Security Council for over seven decades. He highlighted the dire human rights and humanitarian situation in IIOJK since 5 August 2019, as well as the ongoing gross and systematic violations of human rights of the Kashmiri people and the attempts to change the demographic structure of the occupied territory.

He apprised the PGA-elect of his government’s initiatives to mitigate and suppress the socio-economic impacts of Covid-19 pandemic, focused on saving lives, securing livelihoods, and stimulating the economy. He informed the visiting dignitary that his government deployed a $8 billion stimulus package for the poor and the needy, in the highest social security coverage by any government in the history of Pakistan.

The prime minister further highlighted his call for ‘Global Initiative on Debt Relief’ and stressed the need to provide greater fiscal space to the developing countries to overcome deleterious socio-economic impacts of coronavirus pandemic. He also highlighted the high importance he attached to addressing climate change, countering Islamophobia, and combating illicit financial flows from developing countries. He expressed the hope that the 75th Session of the UNGA would accord priority to these issues, which affected billions around the world.

Volkan Bozkir expressed his strong support for the longstanding dispute of Jammu and Kashmir, linking it with peace and stability of the South Asian region. “The Jammu and Kashmir dispute needs to be settled through peaceful means,” the visiting UNGA dignitary said at a joint press stakeout with Foreign Minister Shah Mehmood Qureshi here at the Foreign Affairs Ministry.

The UNGA president-elect, who arrived in Islamabad on a two-day visit earlier in the day, said the meaningful engagement of political and diplomatic channels is significant to resolve the issue in accordance with the resolutions of UN Security Council. Bozkir, the first Turkish national to hold this position for 75th UNGA session, said Turkey’s position on Jammu and Kashmir was well-known and its foreign ministry had issued a strong statement over India’s action of August 5.

Qureshi mentioned that during his meeting with the UNGA president-elect, he briefed him about the evolving situation of IIOJK which is facing military siege for last one year, human rights violations, and illegal search and cordon operations.

The UNGA president-elect said he was impressed by Prime Minister Imran Khan after meeting him. “I met Prime Minister Imran and was honoured and impressed [by him],” he said. “He is a well-known political figure around the world and has a clear vision for the region, for world peace and security, along with important issues like the world is dealing, such as climate change,” he added.

Qureshi, while conveying his deep concerns over the continuing human rights violations in occupied Kashmir since a year now, said, “We had a very good discussion on that [Kashmir], the evolving situation, the military siege that has been going on for more than a year now, the human rights violations and the ceasefire violations.” “The UNGA has deliberated on the lingering dispute three times in a year which is unprecedented and we are grateful for it,” Qureshi said. “Pakistan desires that the discussion on the issue is also held in the UNGA as it is the pulse of the world that highlights the views of the comity of nations,” he said.

Qureshi said the two also discussed the situation in Afghanistan and the positive developments that have taken place in the Doha talks.