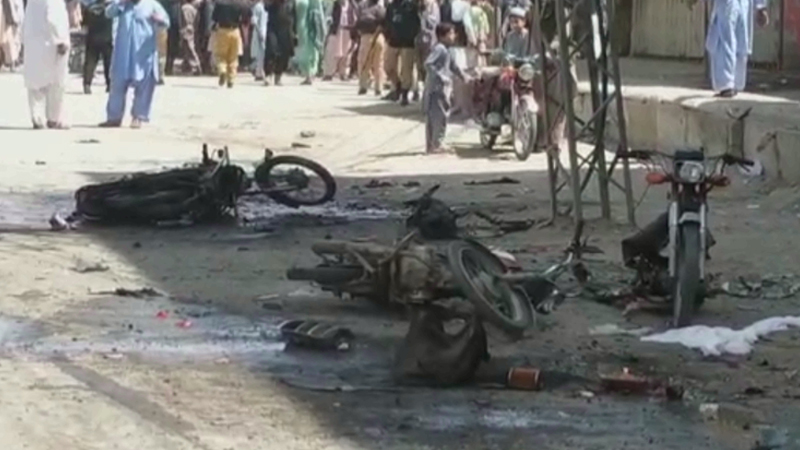 A bomb targeting an anti-drug force tore through a busy market in Chaman city of Balochistan near the Afghan border on Monday, killing at least six people and wounding 21 others, police and hospital officials said.

No one immediately claimed responsibility for the explosion, which was caused by a bomb attached to a motorcycle. The bombing targeted a unit tasked with combating narcotics smuggling. Mohammad Ali, a local police official, said some of the wounded were in a critical condition. Security forces and police cordoned off the area of the blast, where residents said several shops and vehicles were damaged.

Security sources confirmed that the bodies and the injured had been shifted to a nearby hospital. An additional contingent of police officials arrived at the Mall Road to conduct an investigation into the blast.

According to the Chaman SHO, explosive material installed on a motorcycle parked in the area. The explosives were detonated by a remote-controlled device.

Eyewitnesses reported that motorcycles and cars parked in the area were damaged due to the intensity of the blast.

According to police inspector Muhammad Mohsin, unidentified miscreants had planted an improvised explosive device in a motorbike that was parked on the roadside. Durrani said that the explosion targetted a vehicle of the Anti-Narcotics Force. Window panes of several shops and houses in the vicinity were shattered due to the impact of the explosion.

Balochistan Chief Minister Jam Kamal Khan strongly condemned the blast. He also expressed his deep sorrow over loss of precious lives in cowardly act of terrorism. He said terrorist elements wanted to destroy Chaman’s peace to achieve their nefarious goals, adding the plan to install a fence on the Pak-Afghan border was an obstacle to the nefarious intentions of anti-national elements. The installation of the fence would eliminate terrorism and illegal transportation and could improve the law and order situation in the province, including in the border areas, he said.

The chief minister said such cowardly attacks cannot weaken the morale of the security forces and the people. He also sought a report into the incident from the provincial inspector general of police (IGP).

Prime Minister Imran Khan strongly condemned the explosion in Chaman that killed at least five people and injured several others. The prime minister prayed for the departed souls to rest in peace and directed best medical care for the injured, PM office said.

Minister for Information and Broadcasting Senator Shibli Faraz also strongly condemned the blast in Chaman. In a tweet, the minister expressed deep grief and sorrow over the loss of precious lives in the blast and prayed for speedy recovery of the injured. He said that the evil elements were against the development and stability of Balochistan.

Minister for Interior Ijaz Ahmed Shah on Monday strongly condemned the Chaman blast and expressed his deep grief and sorrow over the loss of precious human life in the incident. In a statement, he said, the elements involved in such incidents were enemies of the country and deserved exemplary punishment.

The minister prayed for early recovery of the injured. He said terrorists would never be allowed to succeed in their nefarious designs. The minister expressed his heartfelt sympathies and condolences with the bereaved family.