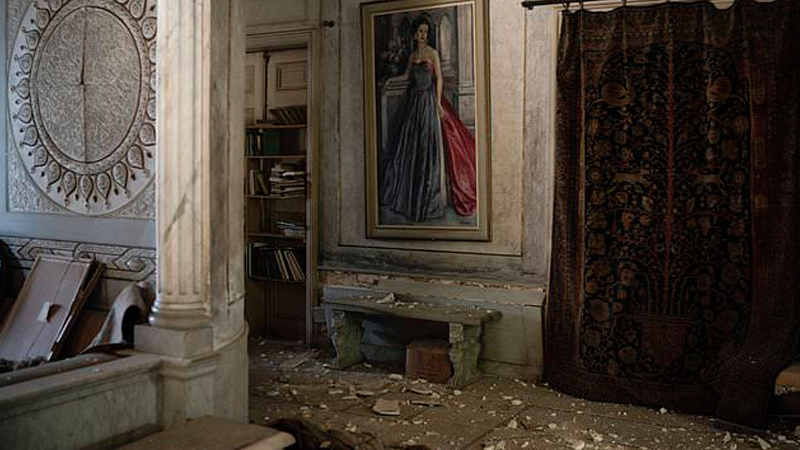 The 160-year-old palace withstood two world wars, the fall of the Ottoman Empire, the French mandate and Lebanese independence. After the country’s 1975-1990 civil war, it took 20 years of careful restoration for the family to bring the palace back to its former glory.

“In a split second, everything was destroyed again,” says Roderick Sursock, owner of Beirut’s landmark Sursock Palace, one of the most storied buildings in the Lebanese capital.

He steps carefully over the collapsed ceilings, walking through rooms covered in dust, broken marble and crooked portraits of his ancestors hanging on the cracked walls. The ceilings of the top floor are all gone, and some of the walls have collapsed. The level of destruction from the massive explosion at Beirut’s port last week is 10 times worse than what 15 years of civil war did, he says.

More than 160 people were killed in the blast, around 6,000 were injured and thousands of residential buildings and offices were damaged. Several heritage buildings, traditional Lebanese homes, museums and art galleries have also sustained various degrees of damage.

The Sursock palace, built in 1860 in the heart of historical Beirut on a hill overlooking the now-obliterated port, is home to beautiful works of arts, Ottoman-era furniture, marble and paintings from Italy – collected by three long-lasting generations of the Sursock family.

The Greek Orthodox family, originally from the Byzantine capital, Constantinople – now Istanbul – settled in Beirut in 1714.

The three-story mansion has been a landmark in Beirut. With its spacious garden, it’s been the venue for countless weddings, cocktail parties and receptions over the years, and has been admired by tourists who visit the nearby Sursock museum.

The house in Beirut´s Christian quarter of Achrafieh is listed as a cultural heritage site, but Sursock said only the army has come to assess the damage in the neighborhood. So far, he´s had no luck reaching the Culture Ministry.

The palace is so damaged that it will require a long, expensive and delicate restoration, “as if rebuilding the house from scratch,” Sursock says.

Sursock has moved to a nearby pavilion in the palace gardens, but this has been his home for many years alongside his American wife, his 18-year-old daughter and his mother, Yvonne. He says the 98-year-old Lady Cochrane (born Sursock) had courageously stayed in Beirut during the 15 years of the civil war to defend the palace. His wife was just dismissed from hospital, as the blast was so powerful that the wave affected her lungs.

Sursock says there is no point in restoring the house now – at least not until the country fixes its political problems.

“We need a total change, the country is run by a gang of corrupt people,” he said angrily.

Despite his pain and the damage from last week’s blast, Sursock, who was born in Ireland, says he will stay in Lebanon, where he has lived his whole life and which he calls home.

But he desperately hopes for change.