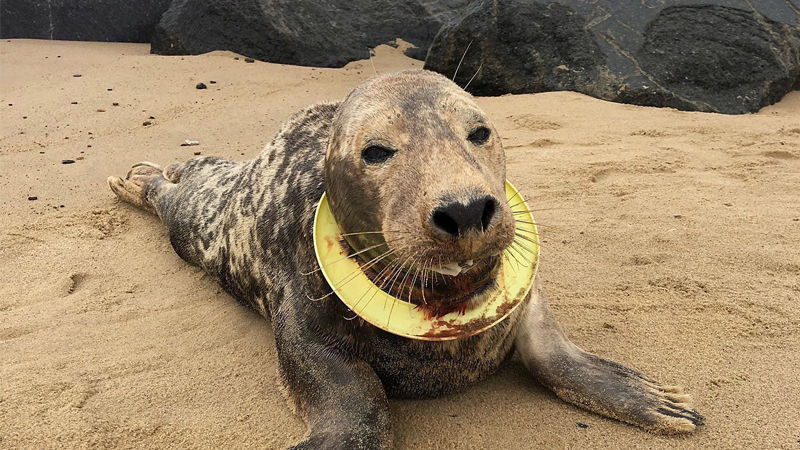 A sculpture of a seal with a flying ring stuck round its neck will tour beaches this summer as campaigners seek to raise awareness of the threat posed by the plastic toys.

The Norfolk-based Friends Of Horsey Seals charity launched the flying rings campaign last year after a series of the blubbery marine mammals came to harm around the coastline of East Anglia.

A seal nicknamed Mrs Frisbee was rescued at Horsey beach in 2017 with a flying disc around her neck, which was wedged tight and cut into her as she continued to grow.

At least two more seals with flying discs round their necks were taken to an RSPCA centre at East Winch, near King’s Lynn, for treatment by early 2019.

In each case staff cut the plastic ring off and nursed the weakened seal back to health.

Friends of Horsey Seals said it has this year stepped up its leaflet and poster campaign with the creation of a life-size seal sculpture with a ring around its neck to use as an education tool.

It has nicknamed the sculpture Sealy, and the base of the model features flying rings that have been cut in half.

The volunteer group said that the model, made by a local artist and funded by Cromer town council, will be taken to beaches to urge people not to discard flying rings.

Alison Charles, manager of RSPCA East Winch Wildlife Centre, said: “We are not anti-fun, but I wish people would not take them (flying rings) onto the beach but rather buy solid discs instead.

“It’s just horrendous, I removed a ring from one seal and I thought her head was going to fall off because the wound was so deep and so horrible.

“This poor animal had suffered because someone had bought a cheap flying ring.”