* At least five dead as rainfall wreaks havoc in Balochistan
* Gas supply to Mastung, Kalat, Pishin and Ziarat suspended as pipeline damaged by floodwater in Bolan 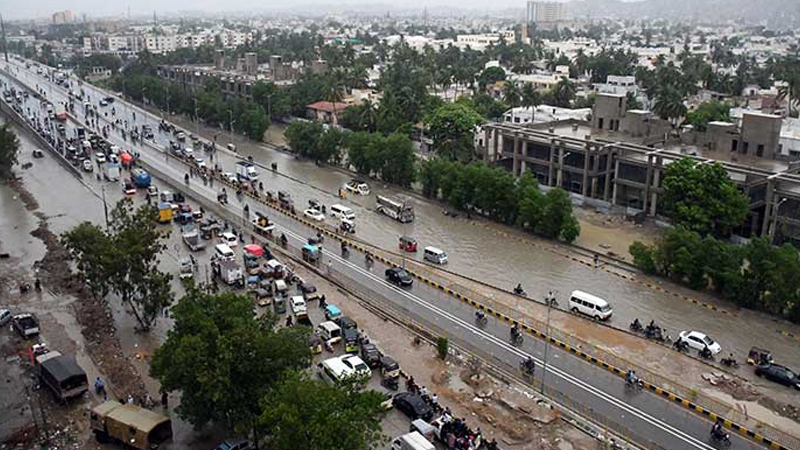 At least 19 people have lost their lives to day over the past four days as torrential rains wreaked havoc in Pakistan’s southern port city, rescue sources and authorities said on Sunday.

The deceased belonged to different areas of Karachi, rescue officials said, adding that girls aged six and 13 were also among the deceased.

One person each from Gulistan-e-Johar, Kati Pahari, Mewashah Graveyard, Malir’s Model Colony, Gulshan-e-Iqbal Block 13-D, Ittehad Town, and North Karachi Sector 2 died due to electrocution. Of these, one was a child aged 13 and another aged six. A man in Landhi No 4 was electrocuted when current hit him through a shop shutter. Two others near City Kot, Civil Hospital also died of electrocution. Two children drowned in the Surjani and Banaras naddis. Two died when the roof of a house collapsed in Lyari’s Jehanabad; one was injured and shifted to hospital.

The body of a minor boy who had drowned a day earlier in the Pirabad Naddi was recovered from the Rexer Naddi. A man had died of electrocution the other day near Johar Morr, while a six-year-old child had passed away of electrocution in Liaquatabad FC Area.

The monsoon rains in Karachi, however, have not alleviated the citizens’ power woes either, as the K-Electric’s power transmission system remained in disarray.

Power supply was disrupted in different parts of the city even after rains and technical glitches that popped up in various localities places were not fixed either.

Sources at the K-Electric said cable faults could not be repaired at various places in the city and that there are also complaints of breakdowns in most parts of Karachi.

Over in Balochistan, heavy rainfall and flooding wreaked havoc, as the Levies have found two dead bodies in Bolan River on Sunday.

According to the Levies sources, two bodies were found in the river near Dhadar.

A gas line damaged by the floodwater in Bolan could not be repaired so far and supply of gas to Mastung, Kalat, Pishin and Ziarat has been suspended for the second day.

The traffic flow, which was suspended due to collapse of Bibi Nani Bridge in rainfall, is yet to be restored and an alternative makeshift road is being made, Levies sources said.

At least five people have died in the ongoing spell of rainfall in Balochistan, according to sources.

According to the weather report, rainfall with thunderstorm is expected in Zhob, Sibi, Ziarat, Loralai, Pishin, Harnai, Qila Abdullah, Qila Saifullah and Kalatdistricts of Balochistan.

Chief Minister Balochistan Jam Kamal on Saturday chaired a meeting to review rain and flood situation in the province and damage to M-8 motorway, which is part of the CPEC route.

Director General (DG) Provincial Disaster Management Authority (PDMA) Balochistan briefed the meeting over the losses and relief measures carried out in the province.

“Twenty-one districts of Balochistan were hit by the rainfall while Dera Bugti, Jhal Magsi, Kohlu, and Sibi remained affected from flood situation,” the PDMA head briefed. The chief minister directed the authorities to ensure coordinated efforts to improve the situation.