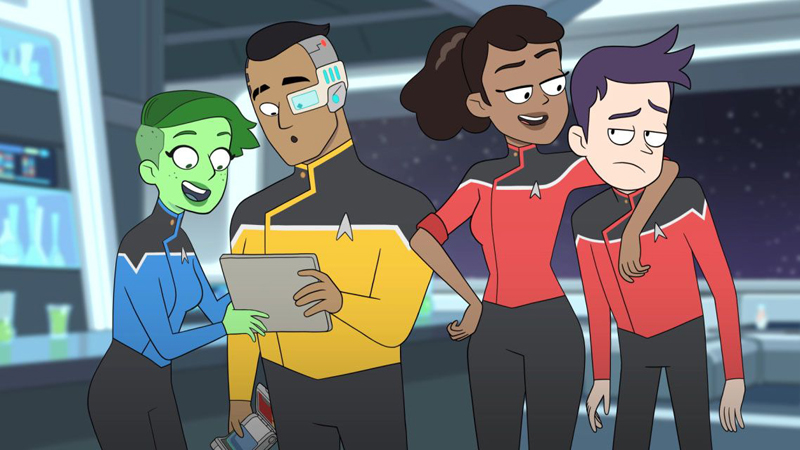 “Star Trek: Lower Decks,” the latest series in the franchise kicked off by Gene Roddenberry in 1966, doesn’t take place on the Enterprise, or the Voyager, or any of the similarly inspiringly-named ships in the fleet. This animated show depicts the comings and goings of the support staff on the U.S.S. Cerritos, a ship sharing its name with a small city within Los Angeles County. It’s a signal of this show’s small-scale ambitions compared to recent dramas “Discovery” and “Picard” — to amuse prosaically, to stay close to the earth rather than soar. In returning to a place CBS All Access has gone before twice in recent memory, the most surprising choice “Lower Decks” makes is to do so without much boldness.

The show focuses on a core group of four characters, all of whose adventures tend towards the small-scale, easily resolved, and cute, if slightly more edgy than Roddenberry might have envisioned. The series cold open, in which Beckett Mariner (Tawny Newsome), drunk on Romulan whiskey, mocks her fellow ensign Brad Boimler (Jack Quaid), for making a captain’s log is somewhat emblematic of the show’s goof-off tone: These aren’t your grandpa’s Starfleet ensigns, with all their idealism. They’re characters for whom trying is a little embarrassing. (As Brad’s log points out, this team specializes in “second contact” — mainly pushing paperwork.) The point is driven home moments later when she stabs him in the leg by accident.

This is a comic universe populated by the slacker Beckett, the rigid Brad, the dreamy D’Vana Tendi (Noel Wells) and the cybernetically-enhanced Sam Rutherford (Eugene Cordero); their adventures have a looseness that can be appealing. And “Star Trek’s” willingness to play with its brand in this way — lending an intellectual property about valiant questing to “Rick and Morty” vet Mike McMahan, to re-engineer as a comedy about the marginal — is admirable. It calls to mind, perhaps, the adventurousness that brought “The Mandalorian” to Disney Plus.

But the comparison stops there: “The Mandalorian” is aiming to excite, thrill, and enthrall, and “Lower Decks” simply to amuse; it also, in tossing aside the “Trek” earnestness, does somewhat torch that which makes the franchise special in the first place. Its first four episodes contain some laughs and some elegantly done character work. But if the joke of “Lower Decks” is that its characters, on a random ship doing clean-up work somewhere in the galaxy, fall short of demanding a show about their adventures, it’s not hard to agree.