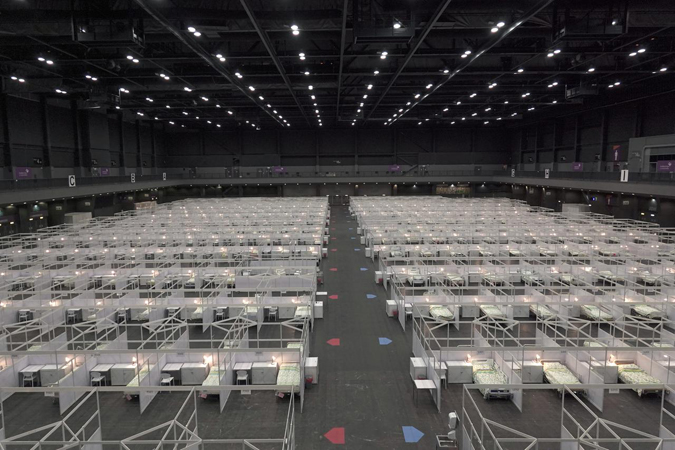 The following is a roundup of some of the latest scientific studies on the novel coronavirus and efforts to find treatments and vaccines for COVID-19, the illness caused by the virus.

Researchers may have found a missing link in the coronavirus reproduction cycle that could potentially be targeted by drugs, according to a report in Science on Thursday. Scientists already knew that once the virus breaks into a cell, it forms double-membrane sacs, or vesicles, in which it makes copies of its genetic material. But the sacs appeared to be closed and it was previously unclear how the genetic material moved from the sac into the fluid in the cell, where new virus particles assembled themselves. Eric Snijder of Leiden University Medical Center and his colleagues discovered tiny channels through both membranes that are wide enough to let the genetic material pass through. “In electron microscope images we can see ‘stuff’ sticking out of these channels. Most likely this ‘stuff’ is the viral RNA on its way out, but as the sample is frozen, there is no movement and we still need to find ways to properly identify the ‘stuff’ as viral RNA,” Snijder told Reuters. “Blocking this channel somehow…could create a big problem for the virus to do its tricks,” he added.

Two new studies found that people who had received vaccines for other viruses developed fewer or less serious coronavirus infections, though more research is needed to determine their potential effectiveness against COVID-19. According to a study published in Cell Reports Medicine on Wednesday, people who received the BCG tuberculosis vaccine in the last 3 years did not developed more severe coronavirus infections. “Results of the prospective BCG trials currently ongoing are needed before definitive conclusions can be drawn,” said coauthor Mihai Netea of Radboud University Medical Center. A separate study from the Mayo Clinic, posted online ahead of peer review, found that people who received other vaccines in the past 5 years – such as against flu, pneumonia, or hepatitis – had lower coronavirus infection rates. Netea said the Mayo Clinic report suggests the “beneficial effects of vaccines may be broader than currently known” and that his team had seen similar data on flu vaccines.

Asymptomatic COVID-19 patients can carry high loads of the new coronavirus in their nose, throat and lungs, and the loads tend to decrease more slowly than in patients who show symptoms, according to a report in JAMA Internal Medicine on Thursday. The researchers studied 303 young and otherwise healthy patients isolated in a community treatment center in the Republic of Korea. Roughly a third had no symptoms when they were diagnosed, and about 20% of this group developed symptoms while isolated. Multiple tests over the course of about a month showed similar viral loads in people with or without symptoms. The tests could not distinguish active, or infectious, virus particles from inactive particles. “For a better understanding of the viral shedding and potential transmissibility of asymptomatic infection, large rigorous epidemiologic and experimental studies are needed,” the researchers wrote.

The average number of weekly diagnoses of six common types of cancer in the United States fell by 46% in the early stages of the pandemic, according to new data in JAMA Network Open. Researchers led by Dr. Harvey Kaufman of Quest Diagnostics studied more than 278,000 patients with new diagnoses of breast, colorectal, lung, pancreatic, gastric, or esophageal cancer from the beginning of January through mid-April. In January and February, an average of 4,310 new cancers were diagnosed weekly, they reported. After March 1, weekly diagnoses fell between 25% and 52%. “Some cancers grow very slowly but others grow a little bit faster and these delays can be significant for some patients,” Kaufman said. The American Society of Clinical Oncology (ASCO) has recommended cancer screening that requires in-person visits be postponed during the pandemic. But this is not a blanket statement, ASCO’s chief medical officer, Dr. Richard L. Schilsky, told Reuters. “Those are decisions that have to be weighed between the doctor and the patient,” he said, adding that they must take into account the patient’s cancer risk, as well as the likelihood of exposure to COVID-19.