* In another picture, the 'Umm-e-Kulsoom' actress and her husband could be seen with her daughter Meissa 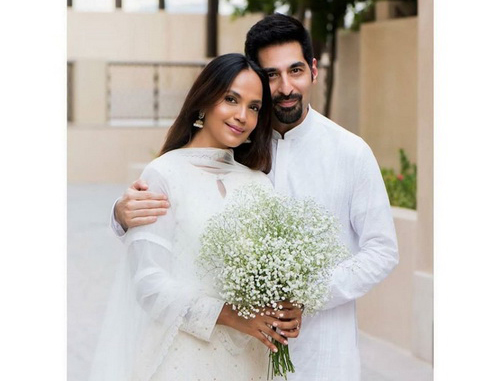 Pakistani actress Aamina Sheikh on Sunday shared first pictures with her husband on Instagram to confirm her marriage a day after posting a cryptic picture of hands holding wedding rings.

Turning to Instagram, the Daam actress, 38, posted pictures of herself and her husband to confirm that she has remarried.

Well, fans showered her picture with love and some also asked why she took a break from social media, the awe and astonishment factor that she brings with her was evident in the comments too

In another picture, the ‘Umm-e-Kulsoom’ actress and her husband could be seen with her daughter Meissa.

She started her announcement series with a ‘Bismillah’ post, after which she posted the pictures with rings.

Aamina was previously married to actor turned director Mohib Mirza. They decided to split after 14 years of marriage over personal differences.