* 'I love u baby happy anniversary,' the 'Young & the Restless' actor wrote on Instagram, alongside a photo of he and Demi sharing a sweet kiss 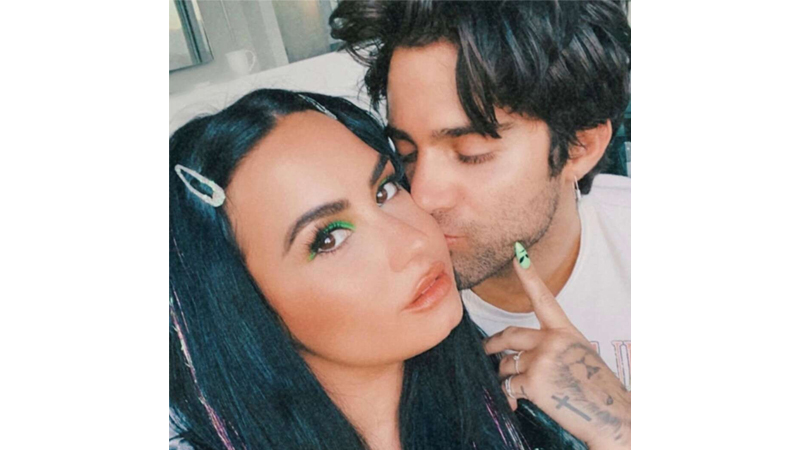 Demi Lovato is feeling “cool for the summer.” The 27-year-old pop star and fiancé Max Ehrich celebrated their five-month anniversary on Friday, August 7. The newly engaged couple opted for a night out on the town and enjoyed a romantic dinner date at the celebrity hot-spot, Nobu.

“i love u baby happy anniversary,” the Young and the Restless actor wrote on Instagram, alongside a photo of he and Demi sharing a sweet kiss.

For the couple’s special outing, it appeared the singer had love on the brain.

Demi donned a flirty fuchsia dress that featured puffed sleeves and a mod-style silhouette. She accessorized with heart-shaped drop earrings and a black-and-white handbag that was also shaped like a heart. Max also dressed up and rocked a black graphic tee and paint-splashed jeans.

The two weren’t the only ones celebrating their anniversary. Demi and the 29-year-old actor were accompanied by influencer and beauty guru Nikita Dragun.

“It’s the ring for me… it’s the supportive friend for me… it’s the 5 month anniversary for me,” Dragun captioned her video of Demi on Instagram Stories, which the singer re-shared on her page.

Max and Demi recently enjoyed some alone time at the Malibu restaurant. “Date night at Nobu,” the singer wrote on Instagram, alongside a photo of the actor giving her a kiss on the cheek. “I love you.”

Just last month, the couple announced their engagement with the world.

“When I was a little girl, my birth dad always called me his ‘little partner’- something that might’ve sounded strange without his southern cowboy like accent. To me it made perfect sense. And today that word makes perfect sense again but today I’m officially going to be someone else’s partner,” the pop star shared in mid-July.

For the couple’s special outing, it appeared the singer had love on the brain

“@maxehrich I knew I loved you the moment I met you. It was something I can’t describe to anyone who hasn’t experienced it firsthand but luckily you did too..,” she continued. “I’ve never felt so unconditionally loved by someone in my life (other than my parents) flaws and all. You never pressure me to be anything other than myself. And you make me want to be the best version of myself. I’m honoured to accept your hand in marriage.”

“I love you more than a caption could express but I’m ecstatic to start a family and life with you. I love you forever my baby. My partner. Here’s to our future,” she closed.

At the time of the engagement, a source told E! News, the 27-year-old star knew Max would pop the big question sooner rather than later.

“Demi had a feeling it was coming, she just didn’t know exactly when,” the source explained. “They both always knew they were each other’s perfect match. Demi has been in love with Max since the second they went on their first date. They have been inseparable since.” The source added, “They just click on every level. When you know you know and this is one of those cases.”