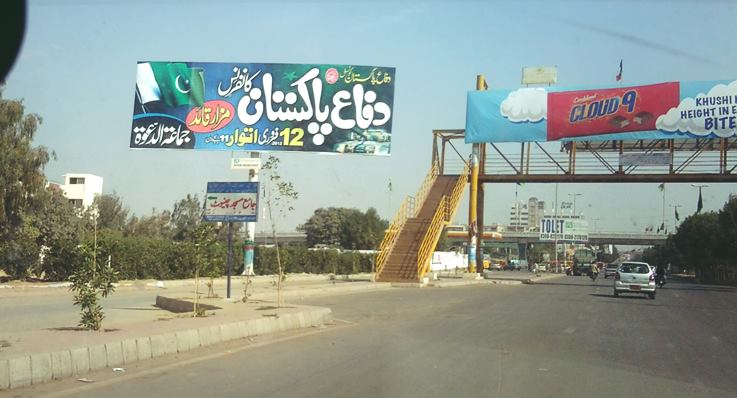 KARACHI: Despite Commissioner orders to remove hoardings from the main road of a metropolis yet many signboards and hoardings may bee seen especially in Cantonment areas.

According to sources Government officials of Cantonment areas involved in supporting all these advertising agencies.

Similarly, illegal billboards have been erected in North Nazim, Shahra-e-Qaedin, Shahra-e-Faisal, Clifton, and Defense area of the metropolis which may be dangerous of precious lives.

Earlier Commissioner Karachi Iftikhar Ali Shallwani has ordered all the deputy commissioners to remove hoardings after two motorcyclists were injured when a hoarding fell on them during a thunderstorm.

People of Karachi demand the Sindh government and Commissioner Karachi immediately ensure the removal of illegal billboards from the city. Illegal billboards falling on buildings during the rains endanger the lives of citizens.

An incident took place recently in the Metropole area of Karachi in which two citizens were seriously injured when a billboard fell from a building.

An FIR has also been launched in the concerned police station by victim relative against Advertising Agency and DMC South.

“The responsibility of treating the injured citizens should be placed on the advertising company”, people demand

According to details, there were clear orders of the Supreme Court that no giant billboards would be erected anywhere in the city but despite these illegal billboards were being erected at various places in the city.

Despite the decision of the Supreme Court, when the administration is involved in this, how can it be removed?

During the survey it was learned that Commissioner Karachi is unable to take any action on this whole issue. The Sindh government and Supreme Court must take action against all the advertising companies violating the court orders.