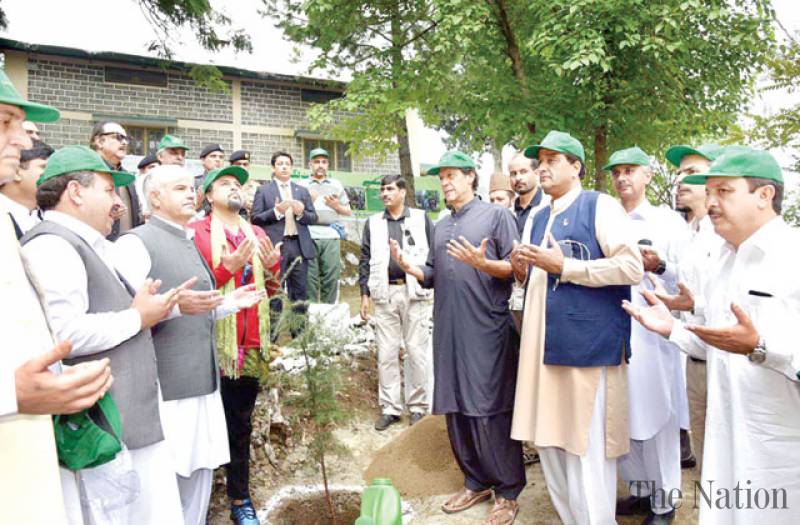 Prime Minister Imran Khan will launch the biggest tree plantation drive today to plant 3.5 million saplings across the country in a day.

Over a million volunteers of the Prime Minister’s Tiger Force will also plant trees as part of Ten Billion Tree Tsunami initiative, marking “Tiger Force Day” as earlier announced by the prime minister.

In a message on Saturday, the prime minister had said he has also asked the members of parliament, ministers and chief ministers to participate in the plantation drive.

Expressing hope that the drive will turn into the “biggest tree planting campaign” in history, he said: “The target is 35 lakh trees in a day, though we will try to exceed it.”

According to details, to participate in the plantation drive volunteers have taken charge of their roles and divided into different teams to dispense their duties.

Following the prime minister’s directives, the distribution of 350,000 saplings has been completed so that they can be planted today.

Special Assistant to PM on Youth Affairs Usman Dar in his message ahead of the campaign, asked opposition politicians Shehbaz Sharif, Bilawal Bhutto, Khawaja Asif and others to join the plantation drive.

“The Sindh government should [join us in] favour of national interest,” the politician had said.

Dar said the prime minister will also be in the field along with other volunteers and the general public tomorrow, adding the drive will begin from Islamabad under the premier, while CM Punjab Usman Buzdar will commence it from Sialkot.

He added that civil society, district administration, forestry department and the citizenry should work together to make the campaign successful.

Advisor to Prime Minister on Climate Change Malik Amin Aslam while addressing a press conference on Saturday said the premier would plant a sapling in Korang, Islamabad.

The advisor said all provinces, including Gilgit Baltistan, Azad Jammu and Kashmir and Islamabad Capital Territory will participate in plantation campaign, with one million members of Tiger Force joining the campaign.

“A target of 300,000 trees for plantation has been set for Sindh, 1.2 million for Punjab and two million trees in Khyber Pakhtunkhwa,” he said. “In the federal capital, around 1.2 million saplings would be planted under the initiative.”

The adviser noted that the first billion trees’ target under Ten Billion Tree Tsunami initiative was going to be achieved by June 2021 as the stocks of saplings were augmented from 50 million to 300 million.

These saplings would be sufficient to meet the massive afforestation initiative.

Aslam added that Pakistan was the fifth most vulnerable country to climate change in the world and it is was our responsibility to act now.

Referring to a World Bank report on climate change, Aslam said if action was not taken, six districts of Pakistan would be under threat to become inhabitable till 2050. These districts include; Hyderabad, Sukkur, Mirpur Khas, Lahore, Faisalabad and Multan.

Minister of State for Climate Change Zartaj Gul has urged the youth of the country to come forward and plant maximum trees on “Plant for Pakistan Day” to achieve the overwhelming plantation target of 3.5 million plants under 10 Billion Tree Tsunami initiative.

In her video message on Twitter, Gul said PM Imran n was going to launch the largest ever one-day plantation of the country on Sunday.

“I have a belief that whenever our youth joins any movement it becomes successful. I request the youth to fully participate in the one-day plantation to make it a success,” she said.