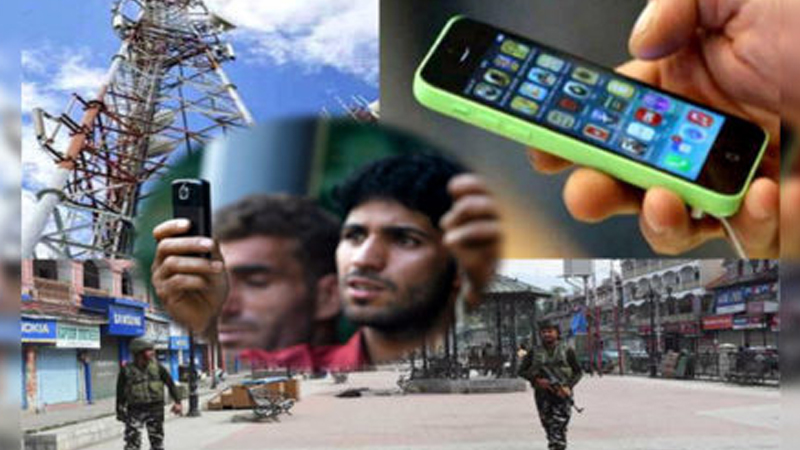 In Indian Illegally Occupied Jammu and Kashmir (IIOJK), the continued internet shutdown after 5 August 2019 has inflicted heavy losses on the local businesses community in the last one year.

According to Kashmir Media Service, ever since Narendra Modi-led fascist government abrogated the special status of Indian Illegally occupied Jammu and Kashmir on 5th August 2019, the Kashmir Valley has been deprived of high-speed internet. This is world’s longest internet shutdown.

Despite desperate appeals from traders, students and people from all walks of life, the 4G service has not been restored and seems unlikely to be back anytime soon. As per Kashmir Chamber of Commerce and Industry (KCCI), which has estimated a whopping Rs 400 billion loss to Kashmir economy post 5th August 2019, sectors that have suffered the most due to internet shutdowns are: tourism, information-technology, horticulture, e-learning, and healthcare.

Sheikh Ashiq Hussain, the KCCI President, said that lack of high-speed web access was taking a toll on all the new age businesses which are completely internet dependent. He said that the KCCI had highlighted the importance of 4G internet service before the Indian government but to no avail.

Interestingly, Kashmiris’ demand to get 4G internet service restored, comes at a time when tech giants in many of the metropolitan cities across India, are foraying into 5G internet services. However, the need for 4G service in Kashmir is not limited to the need of business but has a humanistic perspective.

In 2018, a study “The anatomy of an Internet blackout: Measuring the economic impact of internet shutdowns in India” conducted by Delhi-based think-tank International Council for Research on International Economic Relations (ICRIER) had stated that people suffering from mental illnesses due to the strife in the Valley, struggle to get online psychiatric counseling due to lack of high-speed internet service and frequent internet shutdowns.

This problem has got compounded during the ongoing COVID-19 pandemic, when stress has become a norm and more people are reaching out for medical help to overcome the anxiety and trauma.

“I have been visiting a doctor for anxiety and depression for 8 years, which has increased due to the situation arising out of COVID-19. Frequent internet shutdowns and low speed of internet do not allow me attend proper online counseling. I was also hoping to download some informative videos but it takes a lot of time due to low internet speed,” says a middle-aged person, wishing anonymity.

Farmers and fruit growers say that in the presence of 4G, they were finding technology of a great help for weather forecasts and know about the modern-techniques of farming.

“Last winter the untimely heavy snowfall in November took us by surprise. Usually our youngsters keep updating us about weather forecasts but last year the absence of internet shutdowns hit us hard,” says Abdul Majeed, a saffron grower from Pampore.