* To supplement Independence Day celebrations, the Daily Times will highlight, all of August, the individuals who continue to make Pakistan proud. Our sixth interview is with the record holding cyclist Samar Khan 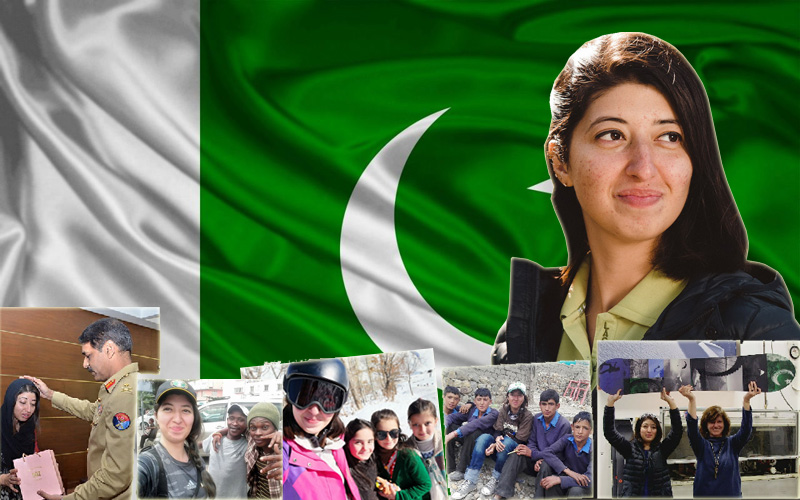 Tell us about your foray into the field of sport and cycling. How did it all begin for you?

Sports was always a fantasy world to me in which a person like me could never enter, as there’s no one in my family doing sports. Also the environment and social norms were not favorable for me to even think about an outdoor field. It all happened all of a sudden when I came across a paragliding course in the Army School of Physical Training. I went there during my semester break and it changed my entire perception towards life. I started enjoying life, physical strength and my growing confidence after starting sports. So, it happened as a personal transformational thing for me, which later became my career.

You are the first woman in the world to ride cycle on 4,500 metres Biafo Glacier in the Karakoram Mountains of Gilgit Baltistan. Tell us about your experience doing that. How challenging and fulfilling was the adventure?

Biafo was a like a new planet for me, in which I had to discover new paths, new techniques and also my own strengths. Initially, I was mocked and criticised for taking a bike in a place where one could hardly walk and I too wasn’t familiar with an environment of a typical glacier. It was like living two weeks of your life in a refrigerator, you sleep on ice, drink from ice and walk on ice in a very uncertain weather. But I loved those beautiful surprises like finding a hidden valley in the next turn, seeing flower beds and high altitude birds, beautiful gushing streams and that challenging cold wind. It’s a perfect spot for adventure seekers. I encountered storms, landslides and it was the ultimate test of my endurance and determination. I fell multiple times, jumped over scary crevices but rode successfully over a glacier, which was everything.

You have born and raised in Dir, KP. How hard is it for a woman in your hometown to follow her dreams and passion and indulge in a sport only men play?

I got lucky enough to move to a city because of my father’s job, where I could continue my education, but opting sports as a career was still far from my imaginations. Because I was supposed to complete my studies, get married and raise kids. In my hometown, playing sports is still considered indecent for a woman and they hardly get higher education let alone doing sports and travelling alone. I started sports in my university when I could talk to my mother and make her understand about my passion and it took months for her to trust my abilities completely.

‘My biggest achievement is cycling on the roof of Africa, Kilimanjaro and representing Pakistan beyond borders. Because that opened the door for international sports and made me realise that how far we are from international sports standards and how many categories of action sports are there in the world, that we have to launch and grow in Pakistan’

You have done your Masters in Physics. How important a role does education play in helping someone achieve their dreams?

Education opens multiple dimensions of your mind, introduces the opportunities and makes you aware of your rights. I didn’t know about my rights as a woman before taking higher education, because it’s not something which is taught to us in our daily lives. Education guided me towards my passion, empowered me and studying Applied Physics became the plus point which developed my habit of planning, analysing and calculating the risk factors during my expeditions.

I am currently working on my personal sports goals and also on my community action plan, called Samar Camp, in which I train youth especially women in sports like snowboarding and mountaineering. The objective behind Samar Camp is to empower youth, both physically and economically through sports. Also working with WWF Pakistan as a goodwill ambassador to create awareness on environmental conservation and to promote bicycles as eco-rides.

You are known as a trailblazer, a breaker of barriers and a daredevil. What according to you has been your biggest achievement so far?

My biggest achievement is cycling on the roof of Africa, Kilimanjaro and representing Pakistan beyond borders. Because that opened the door for international sports and made me realise that how far we are from international sports standards and how many categories of action sports are there in the world, that we have to launch and grow in Pakistan.

I envision the respect, acknowledgement and support for Pakistani athletes, which I have seen in western countries. I have seen them investing in sports and using it as a tool to create harmony and unity in the country. So, why can’t we empower our youth and provide them a positive lifestyle in form of sports? Why can’t we make it a lifestyle to run in the morning, to workout anywhere without any social and gender discrimination? Why can’t we see affordable cycling shops and cycling lanes in the country? As a Pakistani athlete, I carry a huge responsibility towards my country and my people. My vision is to see green flag on global sports events and to see sports becoming a culture of Pakistani nation.

My hero is every Pakistani athlete, who’s shedding sweat and blood for the country, even without having recognition, sponsors, professional nutritionist, proper coaching, sports doctors, sports equipment, sports psychologists and managers. Because the success of an athlete depends on the entire sports industry behind it. There are a lot of self-made athletes in Pakistan and I hope they get acknowledgement and support before they end up being rickshaw drivers and waiters.

Cyclist Samar Khan is the first woman in the world to ride a bicycle on 4,500 metres Biafo Glacier in the Karakoram Mountains of Gilgit Baltistan. She reached Pak-China border, Khunjerab from Islamabad on a cycle and rode over 4,693 meters in -5 Degrees Celcius to set a national record. The Biafo Glacier is the world’s third longest glacier outside the polar regions. She is registered in the Pakistan Book of Records. In December 2017, Khan reached the summit of Africa’s highest peak and she became the first Pakistani woman to summit Africa’s highest peak, Mount Kilimanjaro.

She was the motivational speaker in TEDx Islamabad in 2016. Samar Khan has been selected in Global Sports Mentoring Programme by US Department of State because of her sports achievements and promotion of tourism in Pakistan. In order to highlight the threat of climate change, she signed up as a Goodwill Ambassador for World Wildlife Fund in September 2019. She is the founder of Pace for Peace, Two Girls Ride.

Khan was awarded in Travel2Pakistan day by Pk Travels for promoting tourism.

Khan represented Pakistan in the United States, while building her action plan called Samar Camp to launch biking events and training sessions nationwide. She got mentored by one of the biggest snowboarding company in US, Burton Snowboards.