* Cattle swept away by water, crops severely damaged and walls of mud houses caved in in 21 districts of Balochistan 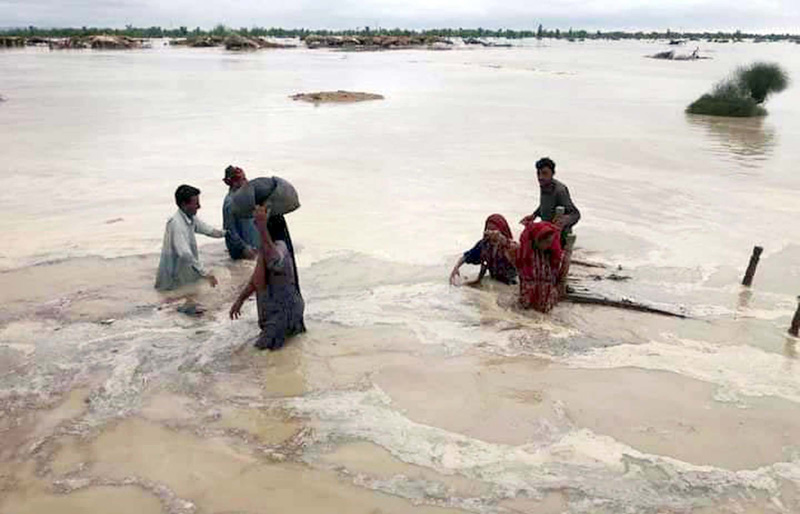 At least six people, including two children, were killed in Balochistan after heavy rain wreaked havoc in the province, causing flash flooding in many districts.

Balochistan government spokesperson Liaquat Shahwani said a flood-like situation was forming in the province, with dams overflowing due to persistent rain the province for the last two days, a private TV channel reported. He said that at least 21 districts have been adversely affected by the downpour. He said the chief minister was supervising the situation and that tents and other aid was being sent to the affected areas. “We are working on opening Gawadar, Bolan and other roads,” he added, and advised the people to avoid any unnecessary travel.

While Zhob saw the second consecutive day of rains, with the natural streams located on Koh-e-Suleman flooded, the Ziarat valley experienced rain for a third day on Saturday. Flash floods occurred in Mastung, Khuzdar, Harnai, Noshki, Loralai, Kohlu, Dhadar, and Dera Bugti, causing massive devastation in their wake. Cattle were reported swept away by the water, crops severely damaged and walls of mud houses caved in. The coastal highway saw a disruption in movement of traffic, as a 30-foot wide crack appeared on the road.

The rains also cut off communication in many villages of the Bolan district’s Machh town and movement on the portion of the national highway close to the town was affected. According to reports, flash floods also occurred in Dhadhar town, with water as high as 4-5 feet. Vehicles bound for Quetta were stopped at Dhadhar, whereas vehicles coming from Quetta were stopped at Kolpur.

Meanwhile, in Bolan, due to the national highway being closed off, the flow of traffic was severely impacted. Hundreds of cars stood stranded. Moreover, at the M-8 Gwadar-Ratodero highway, landsliding caused another disruption in the flow of traffic. Severe flooding also occurred in Wadh and Mola tehsils of the Khuzdar district. The district administration ordered the evacuation of people housed in temporary shelters along the river banks.

In Chaman, strong, gusty winds continued to blow. The city’s power supply remains suspended for the last two days. In Kohlu, the Sonari bridge was swept away by the heavy rainfall and the city lost all ground communication with Sibi and Quetta. Many of the suburbs stood inundated. The deputy commissioner instructed the administration to remain alert and ready to provide any form of assistance sought by residents.

Meanwhile, at least 15 people lost their lives in the last three days as torrential rains wreaked havoc in the metropolis. The deceased belonged to different areas of Karachi, rescue officials said, adding that girls aged six and 13 were amongst the deceased.

The intensity of this rain spell is expected to reduce Sunday afternoon, Deputy Director Pakistan Meteorological Department Abdul Qayyum said, while warning that several rounds of rain were expected on Sunday. “After this system ends, the sea breeze will return to the city,” he added.

Meanwhile, more than 350 electricity feeders of K-Electric tripped, disrupting the supply of power and adding to the woes of the people who have already been suffering frequent outages. The affected areas included Gulistan-e-Jauhar, Pehlwan Goth, Scheme 33, Shah Faisal Colony, Liaquat Market, and Quaidabad. Moreover, New Karachi, Surjani, Khuda Ki Basti, and Kathore have been facing a prolonged outage of power, while several blocks in Federal B Area and Gulshan-e-Iqbal also reported power breakdowns. Furthermore, K-Electric claimed that no electrocution-related deaths occurred due to its infrastructure.