Religious and cultural festivals were events of social significance, Lohri, Basant, Holi, Baisakhi, Dussehra, Diwali, Gurpurav and Muharram were symbols of a composite culture.Tthe principal fairs of Lahore were those of Besakhi, Basant, Dussehra and Mela Chiraghan.Basant mela in January-February in the precints of the mausoleum of Madho Lal Husain near Shalamar Gardens. The Muslims assembled there to pay their homage to the shrine of Lal Husain and the Hindus to adore the Samadhi of Hakikat Rai. Chiraghon ka mela held in Shalamar Gardens. Kadman ka mela held at the tomb of Sakhi Sarwar in Anarkali in February. The Baisakhi mela was held in April on the banks of Ravi. The Bhadarkali was held at Mauza Niaz Beg at Devi Mandar in June. The fair of Dussehra was held at Minto Park, concluding with the burning of the effigies of Ravan and his clan.

The first Moharram procession in Lahore goes back to 1800s. According to traditions Syed Ghulam Ali Shah, popularly known as Gamay Shah, had started a mourning march from Mochi Gate. Since the 1850s, Lahore’s most important Zuljinnah procession has originated from here and travelled the same route around the walled city. The Qizilbash Waqf established by Nawab Ali Raza and still plays a major role in the Azadari practices of the inner city. Nawab Raza Ali Khan was one of the originators of the Zuljinah processions in Lahore. Nawab Palace, located on Empress Road, is the Muharram residence of some of the Zuljinahs. In Shiite belief, once a horse has been associated with Murtajiz he is no longer considered a horse but a ziarat. The main residence is mostly unused. These are their city stables, where the Zuljinnah stays for four to five months up till Muharram. The rest of the year, they spend on the Qizilbash Waqf land in Ali Razabad.

In the inner city of Lahore, each Haveli plays a role, and divides responsibilities for events all year round. While the 20th Safar Chehlum procession begins at Haveli Alif Shah and ends the same night at Gamay Shah. The mourning ends on the 8th of Rabiul Awal with a procession that originates from an Imam Bargah in Islampura, concluding at Karbala Gamay Shah. Another procession to commemorate the martyrdom of Ali Ibn e Abi Talib on the 21st of Ramadan, which starts from Mubarak Haveli, also concludes at Karbala Gamay Shah, making it the final destination of all mourning processions in the city.

Lahore hosts a few iconic buildings of Shia Islam. Snuggled in the midst of the walled city’s network of narrow streets are the old and distinctive Imam Bargahs; Nisar Haveli and Mubarak Haveli. During the rule of Muhammad Shah, Bahadur Ali, Nadir Ali, and Babur Ali constructed a Haveli which was named Mubarak Haveli. If ever there was a Haveli that could be labelled as among the oldest, it would be Mubarak Haveli, Bazaar Hakeeman. The Haveli was abandoned for a number of years in the late eighteenth century. During Maharaja Ranjit Singh’s rule, it was converted into a guest house. The Haveli was handed back to Shia Qazalbash family by British. Mubarak Haveli and Nisar Haveli lie adjacent to each other and were once owned by a single family, they are now under the ownership of two separate members of the same family. 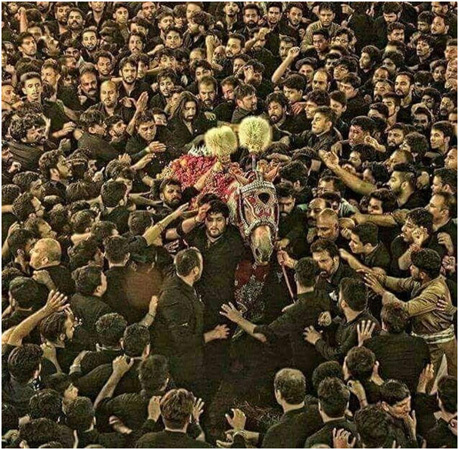 As the sun descends on the ninth of Muharram, thousands of Shias make their way towards Mochi Gate in Lahore. From here, they walk through the convoluted narrow streets in the walled city to reach Nisar Haveli. For some decades now, there has hardly been room to breathe inside the Haveli on the most esteemed night in Muslim calendar. Combine the densely crowded space with the intense passions of thousands of fervent mourners. As the Zakir’s last few words barely audible, the collective lament echoing through the Haveli is transformed. It is in this atmosphere of supercharged fervour that the Majlis comes to an end, shaking with grief the mass of black attired mourners jump to their feet in unison. Undulant race through the sea of people as they turn towards the right most corner. There is a spurt of movement, and the mass of weeping along the courtyard, balconies, walls and windows grows arms. A thousand arms, uncontrollably beating their heads and chests to the words “Ya Hussain, Ya Hussain”. Suddenly the Zuljinah moves, splitting apart the mournful and flagellating ocean of people to create a narrow path. Ash, thrown in the air, hangs low in small clouds, covering the shifting crowd. They bevy towards him, hands outstretched only to make way for him. Through the courtyard of mourners, a sumptuously adorned Zuljinah races out to the streets. This is how the Zuljinnah joins the procession commemorating the martyrdom of Hussain Ibn e Ali, from Nisar Haveli in the Walled City of Lahore. This is how every year, as the ninth day fades into the tenth night, the transition from Majlis to procession is done with divine exactitude.

Every year I make myself present inside Nisar Haveli through the eyes of Naqsh Naqvi, who sends me live clips of the Zakireen and Zuljinah’s entry through the crowd.

May the diversity, the hallmark of Lahore, should always be upheld and promoted.