Nasa reveals the strange shape of our solar system 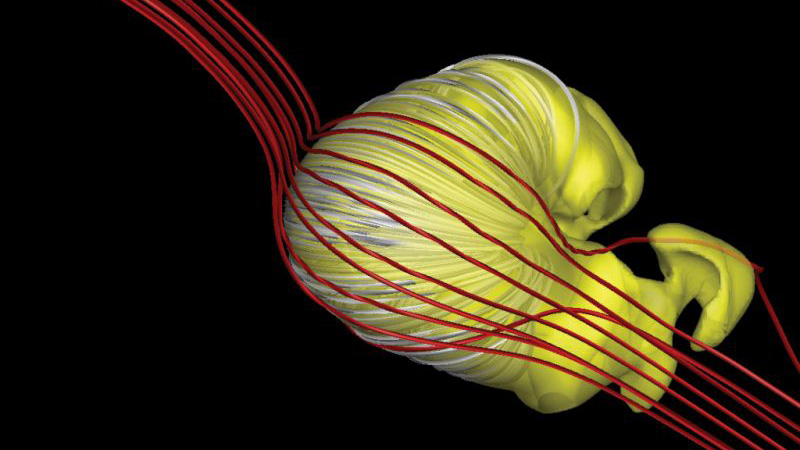 Nasa has revealed the strange shape of our solar system: a deflated croissant. The new findings came after researchers used data from a variety of Nasa missions to plot out the shape of the magnetic bubble surround all of the planets in our system.

Traditionally, depictions of that bubble have shown it as something like a comet, with a rounded leading edge and a long trail behind it.

But in fact it appears to be a much strange shape, like a croissant that has been badly baked or an ear.

The magnetic bubble that wraps around all the planets of our solar system is made as material flows out of the Sun in the solar wind. Outside of it is the point known as the interstellar medium, which fills up the gap between our solar system and the other planetary systems that are our neighbours, throughout the universe.

It is hard to get a picture of that bubble, known as the heliosphere, from inside. The nearest edge to us is some ten billion miles away, and only two objects made by humanity have been able to get near it, when both the Voyager spacecraft travelled out of our solar system and into interstellar space.

But researchers are able to get a picture of the bubble from the inside by looking at particles that fly towards Earth. Those charged particles come to us from distant part of the galaxy as well as within our solar system, and bounce off the bubble and around it, before coming to Earth where they can be measured.

A Nasa mission known as the Interstellar Boundary Explorer uses them as something like a radar, watching for how they bounce off the edges to understand where that edge might be.

The researchers combined that data with information from Nasa’s missions to other planets – such as the Casssini and New Horzions missions that headed further out into our solar system – which gave further measurements of the solar wind.

By combining all of that data they were able to build up the deflated croissant view of our solar system.

Understanding the heliosphere and its shape is key to our understanding of life on Earth. The bubble works like a shield, protecting us from particles caled galactic cosmic rays, for instance, which are thrown out of supernova with intense energy and can cause problems for life on Earth.

It may also help us understand where else life in the universe can be found. Since our helisophere is so key to keeping us safe from galactic cosmic rays, it may be that other planetary systems that don’t have similar protection might be uninhabitable, and that planets there would never be able to sustain life.