Biochemists to Bolsonaro: virus protests across the world 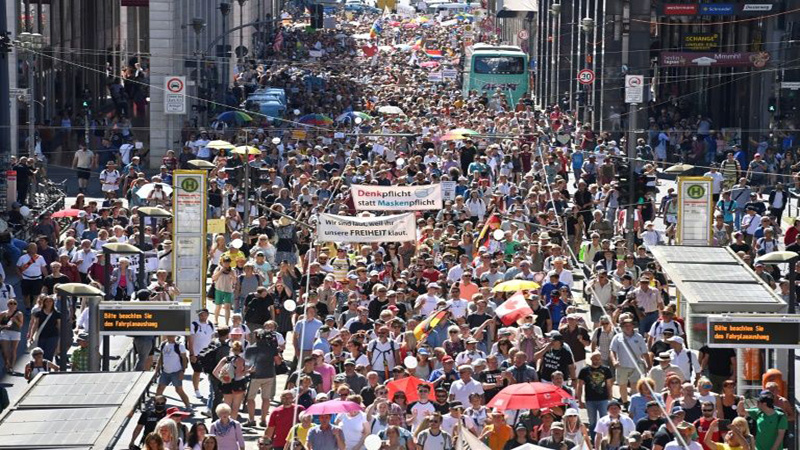 As the prospect of a second virus wave fuels fears of new lockdowns in Europe and elsewhere, anger is growing in some quarters over crippling restrictions imposed to slow transmission of the disease.

From football fans to far-right conspiracy theorists to presidents, here is an overview of those who are protesting measures related to the pandemic.

A movement calling themselves Querdenken-711 or “Lateral thinkers-711” sprung up in the western German city of Stuttgart with anti-coronavirus restrictions demonstrations as early as in mid-April, days before Germany began to ease its lockdown on April 20.

The movement rails against the “dictatorship” of the corona measures and has held “vigils for the constitution”. Initiated by Michael Ballweg, an IT entrepreneur, the movement has snowballed, gathering along its way conspiracy theorists, anti-vaxxers and far-right or far-left activists. Some 20,000 of them marched in central Berlin last weekend, most wearing no masks and failing to respect social distancing rules, sparking a hail of condemnation.

The movement has called new protests in Stuttgart on Saturday and in Dortmund on Sunday. Another round of demonstrations is also expected in Berlin on August 29.

In the Netherlands, similar groups have launched protests but the demonstrations have so far stayed small, although hardcore football supporters have joined in, openly seeking confrontation with police at demonstrations.

A group calling themselves “virus truth” is co-led by former biochemist-turned-dance instructor Willem Engel, who told local papers he was schooled in the Dutch tradition of individuality and the right to question decisions by the country’s health authorities.

In July, dozens gathered in London to protest the face mask requirement in England’s shops and supermarkets, many of them holding banners with widely discredited conspiracy theories — such as coronavirus prevention measures being used for “mind control”.

Romania has also seen a few hundred so-called coronasceptics — holding religious icons, the national flag and signs that read “I believe in GOD, not in COVID” — frequently protest in Bucharest against what they call a “sanitary dictatorship”.

Small groups of protesters in Spain have meanwhile flouted one of the most stringent restrictions in Europe to march.

On July 12, police broke up an unauthorised gathering of a few dozen protesters shouting “no to dictatorship” and holding up anti-mask and anti-5G placards.

Beyond the grassroots, leading criticism against restrictions aimed at dampening transmission has come from top politicians themselves.

Brazilian President Jair Bolsonaro has fought stay-at-home measures to contain the virus, despite testing positive and spending three weeks in isolation after coming down with a fever last month.

Last week, in his first public event since his illness, he greeted a crowd of supporters in the northeastern state of Piaui, removing his face mask to loud cheers.

US President Donald Trump had adamantly refused to advocate for the wearing of masks until mid-July.

Many sheriffs — who are often elected officials — have also resisted enforcing state-imposed mask regulations in their counties.

In Italy, far-right leader Matteo Salvini was widely criticised last week after he spoke in the Senate without a mask, saying that “greeting with elbows is the end of the human race.”

He has since backpedalled, saying that masks should be worn “when needed”.

But in some countries, people have come out to express dissatisfaction at their government’s failure to impose stricter measures.

Serbia saw a brief but intense outburst of anger in early July, when police clashed with protesters outraged over the government’s handling of the coronavirus pandemic.

Demonstrators came out into the streets, accusing President Aleksandar Vucic of having facilitated a new wave of infections by lifting an initial lockdown for general elections that his party largely won.

Some demonstrators hurled stones, firecrackers and flares at police, who responded with tear gas.

In Sweden, which controversially adopted a softer approach to fighting the virus, demonstrators have called for tighter rather than looser measures.

A handful of protesters have regularly assembled outside the Public Health Agency’s weekly press conferences in Stockholm.