PM to launch biggest ever drive to plant 3.5 million trees a day 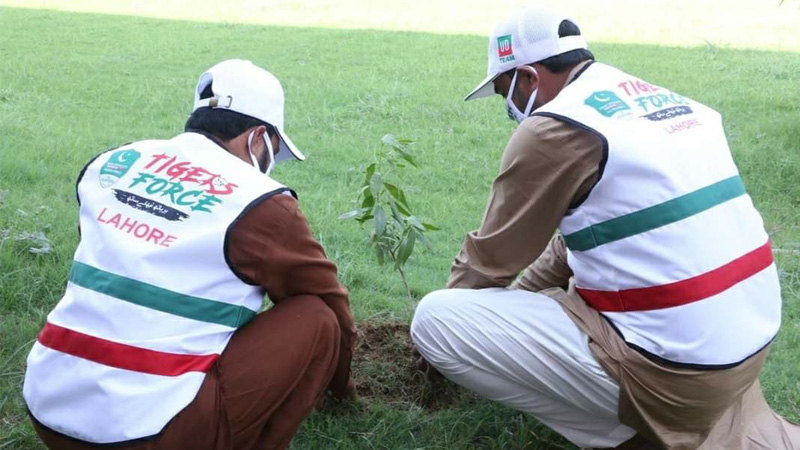 Prime Minister Imran Khan will launch country’s history’s biggest tree plantation campaign on Sunday targeting to around 3.5 million trees in a day across the country.

“I want everyone to join me on 9th August, in planting trees all over Pakistan,” the prime minister tweeted. He also asked the parliamentarians ministers, chief ministers and Tiger Force volunteers to participate in the biggest tree planting campaign in the history. “The target is 35 lakh (3.5 million) trees in a day though we will try to exceed it,” the prime minister resolved.

The government has announced to observe August 9 as ‘Tiger Force Day’ across Pakistan when over a million volunteers along with government would plant trees as part of 10 Billion Tree Tsunami initiative. As per plan, around 2 million saplings would be planted in Khyber Pakhtunkhwa, 1.19 million in Punjab, 300,000 in Sindh, 57,000 in AJK, 15,000 in Balochistan and 11,500 in Gilgit Baltistan.

Stage is set for breaking a one-day tree plantation record as the government has completed its preparation for planting around 3.5 million saplings across the country on Sunday (August 9), announced as the ‘Tiger Force Day’ by Prime Minister Imran Khan to recognize the voluntary services of youth during the coronavirus pandemic.

All the local administrations along with the Corona Relief Tiger Force (CRTF) members have completed rehearsals in their respective areas to mark the day with full zeal and fervor. The social networking sites are flooded with the pictures of the CRTF volunteers who can be seen rehearsing for the day while donning dedicated jackets, masks and caps.

Such activities would obviously pave the way for achieving the ambitious plan of the present government for planting 10 billion trees in the country by 2023. ’10 Billion Tree Tsunami’ is a flagship initiative of the current government to enhance the forest cover and cope with the looming threat of climate changes.

Previously, there was a record of planting some 600,000 plants in one-day which was also set by the Pakistan Tehreek-e-Insaf government in Khyber Pakhtunkhwa.

“All arrangements for commemoration of ‘Tiger Force Day’ have been finalized as 3.5 million saplings are delivered to all the local administrations for the upcoming plantation drive,” said Special Assistant to the Prime Minister (SAPM) on Youth Affairs Muhammad Usman Dar in a video message released here.

Teams of the tiger force volunteers had been formed for the upcoming drive and they were told about their assignments in that regard, he added.

Usman Dar said Prime Minister Imran Khan would take part in the plantation drive to boost the morale of the CRTF members, who were fully determined to make the drive a success.

The prime minister would kick off the plantation campaign from Islamabad, whereas Chief Minister Punjab Sardar Usman Ahmad Khan Buzdar would launch it in Sialkot.

He said the local administrations, forest departments and other stakeholders would fully participate in the drive to make it successful.

The SAPM urged the leaders of opposition parties to take part in the plantation campaign as it was a national cause.

Meanwhile, Usman Dar , who heads the CRTF, met Chief Minister (CM) Usman Buzdar to discuss overall strategy for celebrating the ‘tiger force day’ in the province. The CM Punjab told the SAPM that around 520 ceremonies would be held in connection with the plantation drive.

He said the province would plant 1.2 million trees to ensure green environment for the future generations under the vision of Prime Minister Imran Khan.

Initially, it was assigned the task of assisting the local administrations in carrying out rescue and relief activities across the country. Later, additional tasks were added to their duties including tree plantation drive, locusts’ surveillance and other services that required more human resource.