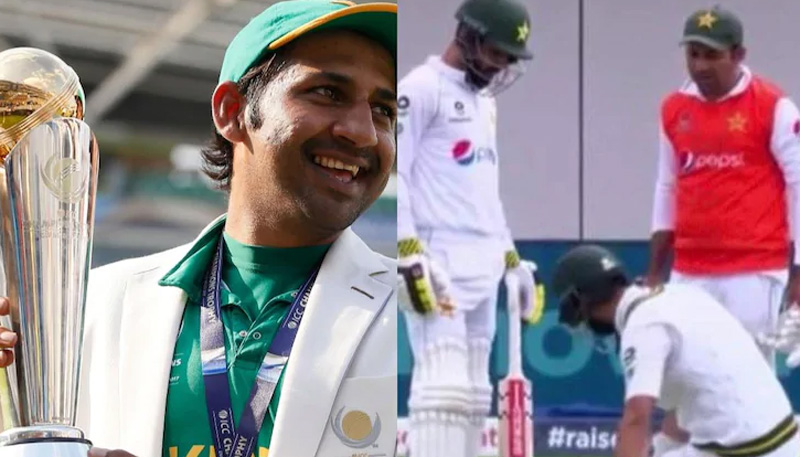 LAHORE: Former cricketers Shoaib Akhtar and Rashid Latif have flayed the Pakistan team management for making former captain Sarfaraz Ahmed perform the 12th man duties in the ongoing Manchester Test between the Men in Green and England. Social media was abuzz after Sarfaraz, who is part of the 16-member Pakistan squad for the aforementioned Test, was seen carrying drinks and shoes for opener Shan Masood during the 71st over of the Pakistan innings on day two. “I didn’t like the visual. If you want to make an example out of a boy from Karachi, then it is wrong. You can’t do this to a player who has led Pakistan for four years and has won Champions Trophy for the country. You have made him carry the shoes. If he has done it himself, then stop him. Wasim Akram never brought shoes for me,” said Akhtar. “This shows that Sarfaraz is such a docile and weak man. He must have lead Pakistan in the same way as he carried the shoes. That’s why Mickey Arthur always dominated him. I am not saying carrying the shoes is a problem, but former captain can’t do that,” he added.

Latif also questioned the intention of Pakistan team management, while pointing out that other senior players like Mohammad Amir and Wahab Riaz were not even in their Pakistan kits. “Senior players like Amir and Wahab who are also sitting out, are not even in their kits. They are wearing track suits. This is not team spirit, but this is greatness of Sarfaraz because he is passionate about the game. This should not have happened,” said Latif.