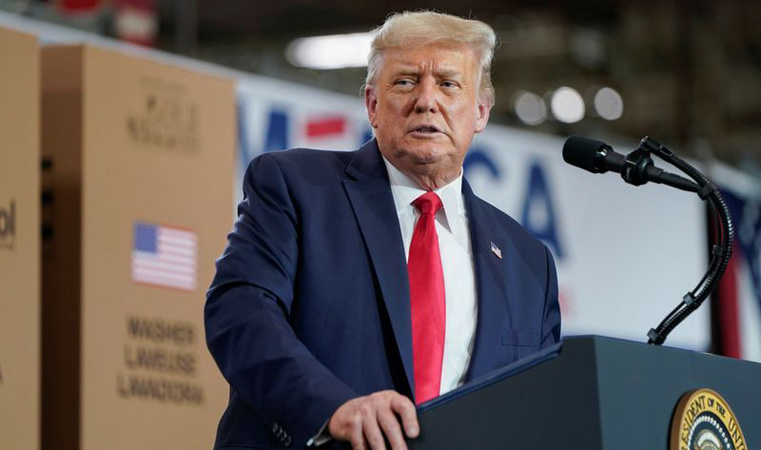 US Republican President Donald Trump asserted on Thursday that his Democratic opponent in November’s election, Joe Biden, is “against God,” even though Biden frequently discusses how his Catholic faith has guided his actions as a public official. With Trump trailing Biden in four recent polls in Ohio, the president is fighting to win voters in the traditional swing state as the coronavirus pandemic threatens his chances of a second term. After addressing a small crowd at a Cleveland airport on Thursday, Trump went on to deliver a campaign-style speech at a Whirlpool plant in Clyde, Ohio. “He’s following the radical-left agenda: take away your guns, destroy your Second Amendment, no religion, no anything, hurt the Bible, hurt God,” Trump said about Biden in his Cleveland speech. “He’s against God.” The Second Amendment of the US Constitution gives Americans the right to keep and bear arms. Trump did not explain what he meant. His accusation, though, could solidify support from his party’s sizable conservative Christian bloc and also damage voters’ view of Biden, the first Catholic Vice President in US history. John Kennedy was the first and only Catholic elected President when he won in 1960.

In a statement on Thursday night, Biden said Trump’s attack was “shameful” and that faith had been the bedrock foundation of his life.

“President Trump’s comments reveal more about him than they do about anyone else. They show us a man willing to stoop to any low for political gain, and someone whose actions are completely at odds with the values and teachings that he professes to believe in,” Biden said.

More than three-fourths of Americans practice Christianity or another religion, according to the Pew Research Center. Trump has been hurt politically by his response to the coronavirus pandemic that has recently killed on average more than 1,000 Americans each day.

While he speaks very little about his own Presbyterian faith and rarely attends church, Trump works closely with evangelical Christians and puts their causes of restricting abortion and preserving gun ownership at the top of his policy agenda.