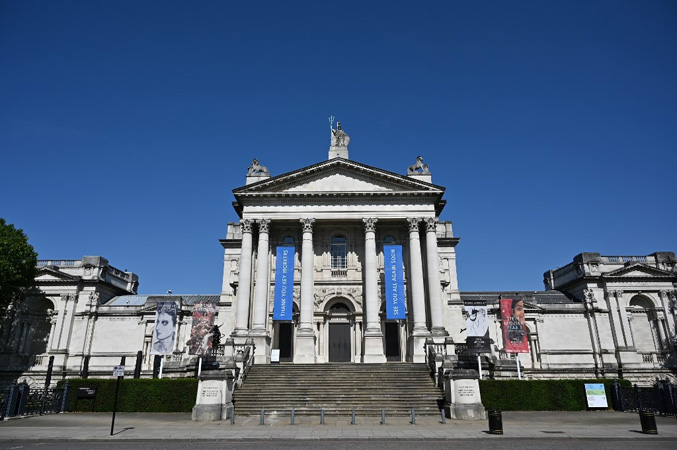 Britain’s Tate museum said it was considering how to address “deeply problematic racist imagery” in a restaurant at one of its London galleries, as anti-racism campaigners called for the art to be removed or the restaurant relocated.

Tate, a network of four government-sponsored art museums, said it was weighing options on Wednesday as Black lawmaker Diane Abbott added her voice to calls to move the restaurant out of a room that is painted with such a “repellent” mural.

The work, by celebrated 1930s artist Rex Whistler, features an enslaved Black boy chained by his neck to a horse and cart and his distressed mother.

“Tate has been open and transparent about the deeply problematic racist imagery in the Rex Whistler mural,” a Tate spokesman said in a statement.

“We are continuing to actively discuss how best to address the mural and we will keep the public updated over the coming months,” he added, giving no further details.

The restaurant is currently closed due to the pandemic.

Hundreds signed a petition launched this week calling on the central London Tate Britain to remove “The Expedition in Pursuit of Rare Meats” mural or change the restaurant’s location.

“The reality of the room is truly grotesque,” the petition said.

Abbott, a member of the main opposition Labour party and the first Black woman in Britain to become a member of parliament, also spoke out against the notion of fine dining amongst such “repellent images”.

“Museum management need to move the restaurant. Nobody should be eating surrounded by imagery of black slaves,” she posted on Twitter.

A statement on the restaurant website acknowledges the 1927 mural includes “offensive” and “unacceptable” content, which it says reflected common attitudes in Britain at the time.

“We hope to tell a more inclusive story of British art and identity and confront these difficult and offensive histories,” it added.

The row comes as Black Lives Matter protests around the world demand fresh scrutiny of statues, art and artefacts that campaigners say uphold the legacy of slavery and colonialism.

Campaigners have felled monuments to disgraced white leaders and want others removed, while critics say such works should be recognised as part of a nation’s heritage and left to stand.