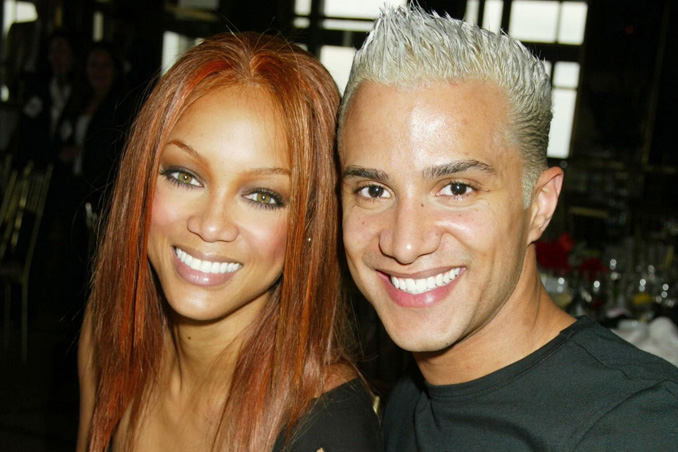 Jay Manuel isn’t keeping his eyes peeled for any Tyra Mail. On Wednesday’s episode of Just the Sip, the makeup artist opened up about his experience filming America’s Next Top Model and discussed his relationship with former co-star Tyra Banks. This conversation came amid Manuel’s press tour for his debut novel, titled The Wig, The Bitch & The Meltdown.

While Manuel’s novel is a work of fiction, he made sure to spill his truth to E!’s own Justin Sylvester on Just the Sip. Per the famed makeup artist, filming ANTM “started off bubble gum and roses” but shifted as time went on.

Even though Manuel held the title of Creative Director on the show, not all creative decisions were made by him. In fact, as he previously discussed in Variety, Manuel objected to a Cycle 4 photoshoot where the models were instructed to swap races.

Not only was Manuel “uncomfortable” with the concept, but “the culture was shifting rapidly behind the scenes.” Thus, he recalled turning to the co-Executive Producer and saying, “I can’t do this shoot.” “I was told I had to do that shoot and show up,” he continued. “And they said, ‘Don’t worry we’ll cover you in the edit. We’ll make sure you’re not, kind of, dragged for it.'”

As Manuel told Sylvester, you could see how “uncomfortable” he was while filming that episode. He noted, “I did not want to do that shoot, at all!”

Despite feeling uneasy about the shoot and other aspects of the show, Manuel reminded those tuning in that he had “a network contract for several cycles.” Also, the 47-year-old TV personality claimed there was “a fear culture” on set.

He explained, “On Top Model, there was a bit of this fear culture, so I kind of had to go along with it.”

It was bad enough that Manuel was ready to leave the show after his contract was up in Cycle 8.

“I was free and clear to do whatever I wanted to do. And they wanted to renegotiate for more cycles, and I reached out to Tyra first, because she always asked me to speak with her first,” Manuel shared. “And I said, ‘Unfortunately, I can’t come back to the show…I feel like I’ve given all I can to the show and I’m going to work on other things.'”

Since Banks is a businesswoman, Manuel “thought for sure she’d understand” his decision to move on from the show. Unfortunately, that wasn’t the case.

Even though Manuel held the title of Creative Director on the show, not all creative decisions were made by him. In fact, as he previously discussed in Variety, Manuel objected to a Cycle 4 photoshoot where the models were instructed to swap races

“She just had two words for me, ‘I’m disappointed.'” he expressed. “And that was it, that was the end of the discussion.”

According to Manuel, over the course of 3 months, ANTM screen-tested well-known people from the fashion world for his role. Yet, no replacement was found.

“I was on a vacation-and they were two weeks from their production-and my attorney at that time called me and said, ‘They’ve come back and asked could you do just one cycle? Just one cycle as a one-off until they find the right person?'” he spilled.

Initially, Manuel turned down the offer as he had already made another commitment. However, he said his lawyer then called him and made it clear the studio wouldn’t take no for an answer.

Manuel went back for Cycle 9 as just talent, not as a producer. And while Manuel was assured that everyone was happy he was back, Banks allegedly greeted him with the silent treatment.

“The first time I see her is walking on to set, you know the panel we do in casting, and I just said, ‘Hey, I’m so glad you’re here early ’cause I just wanna…'” he detailed. “Walked right by, did not talk to me.”

At first, Manuel thought the supermodel just didn’t hear him. He claimed he was ignored until cameras started rolling. Per the ANTM alum, this chilly demeanour continued throughout most of filming.

“I got a message to come see her in her hotel room and, to be fair, she apologized,” Manuel remembered. “And said, ‘I wasn’t being professional. I am an executive producer, you are talent here, I should have been more professional.'” After the apology, Manuel signed on for additional cycles, but his friendship with Banks “never really recovered.”

He relayed, “I’m sure she has her reasons around why she reacted that way.”

Thankfully, “things did get better” between the colleagues, allowing for some “very magical, fun moments” on ANTM.