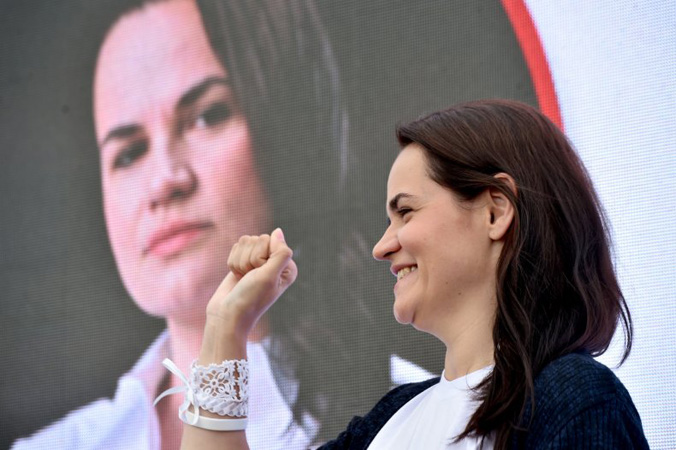 The surprise opposition candidate mounting the most serious challenge in years to Belarusian President Alexander Lukashenko said Friday that her country was waking up, but warned that the strongman planned to rig the vote.

Political novice Svetlana Tikhanovskaya has emerged as the rising star of the opposition in her ex-Soviet nation, ruled by Lukashenko since 1994 and sometimes described as Europe’s last dictatorship.

Speaking to AFP in central Minsk after a gruelling campaign that has seen her attract big crowds of supporters, Tikhanovskaya said it seemed something in her country had changed ahead of Sunday’s election.

“People are waking up, rediscovering their self-respect,” the 37-year-old said, wearing the white bracelet that has become the symbol of Belarus’s opposition.

Tikhanovskaya decided to run after her 41-year-old blogger husband, Sergei Tikhanovsky, ended up in jail and could not submit his own presidential bid in time.

She said she expected Lukashenko to rig the election but warned that he needed to quit power peacefully if he lost.

“We won’t be able to prevent falsifications. We’ve seen over the past couple of days how brazenly this election is being falsified. There is no hope that they will count honestly. We have to be realistic.”

Early voting began in the country of 9.5 million people on Tuesday, with official turnout over the past three days already at more than 22 percent.

Tikhanovskaya said the opposition would conduct an alternative count and would know if the election had been rigged, but said she would not urge her supporters to take to the streets. “At this stage each one has to decide for himself,” she said, warning that Lukashenko would only encourage protests by quashing dissent.

“They are doing everything for the peaceful protests to become bloody ones. And I don’t want this.”

Switching from Russian to English, a language in which she trained as a teacher, Tikhanovskaya said: “People are tired. Twenty-six years is enough.”

She said that if an alternative candidate ends up winning the vote, the 65-year-old strongman should “step away peacefully” and let the country “move forward with a new leader”.

Tikhanovskaya only made the decision to stand for president in May and was allowed to after the electoral commission dropped two stronger opposition candidates.

Despite a lack of political experience, she has quickly emerged as the country’s top opposition figure, with tens of thousands rallying to support her bid.