* 'I know I can't speak for anyone else's experience besides my own but I want to acknowledge that I have only ever had positive takeaways from my time with Ellen,' she Tweeted 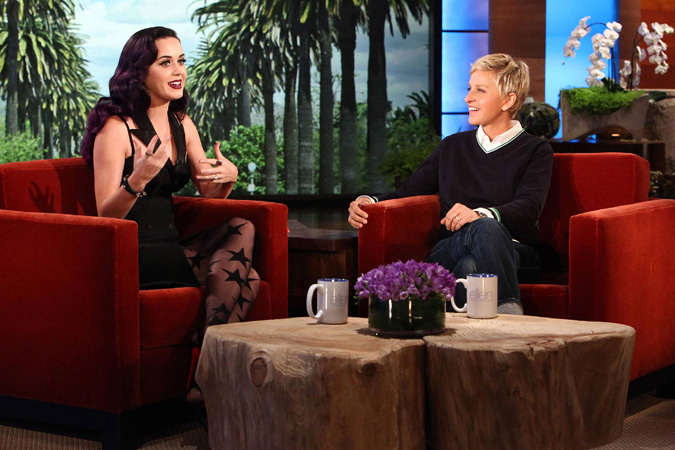 Katy Perry is standing by Ellen DeGeneres. The 35-year-old singer took to Twitter on Tuesday, Aug. 4, to defend the 62-year-old talk show host.

“I know I can’t speak for anyone else’s experience besides my own but I want to acknowledge that I have only ever had positive takeaways from my time with Ellen & on the @theellenshow,” she tweeted. “I think we all have witnessed the light & continual fight for equality that she has brought to the world through her platform for decades. Sending you love & a hug, friend @TheEllenShow.”

Perry wasn’t the only celebrity to show support. Portia de Rossi also recently shared an Instagram post that read, “I stand by Ellen.”

“To all our fans….we see you,” the 47-year-old actress and wife of DeGeneres wrote. “Thank you for your support. #stopbotattacks.”

The posts came amid allegations about The Ellen DeGeneres Show’s workplace environment. In July, BuzzFeed News published a piece in which one current and 10 former employees spoke out about the alleged “toxic work environment.” Executive producers Ed Glavin, Mary Connelly and Andy Lassner said in a statement to E! News they are taking these claims “very seriously” and noted “the day to day responsibility of the Ellen show is completely on us.” DeGeneres, who was not accused of the alleged misconduct, addressed the claims in a letter to her staff. An internal investigation was also launched.

Perry wasn’t the only celebrity to show support. Portia de Rossi also recently shared an Instagram post that read, ‘I stand by Ellen’

“On day one of our show, I told everyone in our first meeting that The Ellen DeGeneres Show would be a place of happiness-no one would ever raise their voice, and everyone would be treated with respect,” DeGeneres wrote in part of the note. “Obviously, something changed, and I am disappointed to learn that this has not been the case. And for that, I am sorry. Anyone who knows me knows it’s the opposite of what I believe and what I hoped for our show.”

She then continued, “I could not have the success I’ve had without all of your contributions. My name is on the show and everything we do and I take responsibility for that. Alongside Warner Bros, we immediately began an internal investigation and we are taking steps, together, to correct the issues. As we’ve grown exponentially, I’ve not been able to stay on top of everything and relied on others to do their jobs as they knew I’d want them done. Clearly some didn’t. That will now change and I’m committed to ensuring this does not happen again.”

She also wrote, “I’m also learning that people who work with me and for me are speaking on my behalf and misrepresenting who I am and that has to stop. As someone who was judged and nearly lost everything for just being who I am, I truly understand and have deep compassion for those being looked at differently, or treated unfairly, not equal, or- worse-disregarded. To think that any one of you felt that way is awful to me.”

According to a statement from Warner Bros., “WarnerMedia interviewed dozens of current and former employees about the environment at The Ellen DeGeneres Show” for the investigation.

“The Ellen DeGeneres Show is, and has always strived to be, a place that brings positivity to the world,” part of the company’s statement read. “And though not all of the allegations were corroborated, we are disappointed that the primary findings of the investigation indicated some deficiencies related to the show’s day-to-day management. We have identified several staffing changes, along with appropriate measures to address the issues that have been raised, and are taking the first steps to implement them. Warner Bros. and Ellen DeGeneres are all committed to ensuring a workplace based on respect and inclusion. We are confident this course of action will lead us to the right way forward for the show.”

BuzzFeed News also published a separate report at the end of last month in which former employees accused executive producers of engaging in sexual misconduct or harassment. E! News did not name these producers. One producer denied “any kind of sexual impropriety” and another is “100 percent categorically denying” the allegations in the article. A third producer cited in the article did not respond to a request for comment. Warner Bros. also did not comment on these accusations.

After BuzzFeed News published its report, a source who used to work on The Ellen DeGeneres Show told E! News, “I did not see anything out of the norm. There were definitely inappropriate things said. I wasn’t ever offended. I never felt any malice.”

“I don’t really have anything dramatic or outstanding in my time there,” the source continued. “Having to stay after all the executive producers left for the day, often times they were just shooting the s–t until after 8 p.m, people getting yelled at because white boards weren’t done properly, that kind of stuff but not abusive. Inappropriate things were said that in this climate you can’t say now.”

DeGeneres’ personal spokesperson confirmed to Today that The Ellen DeGeneres Show is scheduled to return Sept. 9 after its summer hiatus.