‘La Llorona’ — dictatorships, denial and the spirits of the dead 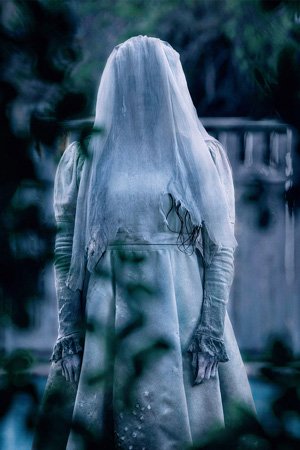 Folklorists will tell you that la llorona is a ghostly figure said to be a crying mother doomed to grieve for her drowned, dead offspring in perpetuity and it takes a while to figure out how the Latin American legend fits into Jayro Bustamante’s extraordinary, eerie-as-hell horror movie.

Is the weeping spirit being summoned by Carmen, the matronly head of a household who we meet, via a slow, Kubrickian zoom out – the first of many – in the middle of a coven-like ritual? Is la llorona the one who’s making her husband Don Enrique, a long-retired Guatemalan general, believe he’s hearing things go bump in the night? Will their daughter Natalia, who keeps telling her own child not to listen to those horrible things people say about Grandpa, end up channelling the ghost? Or maybe the servants who cater to these rich folks’ needs are enacting their own form of class warfare, courtesy of this wailing spectre?

Such withholding is a key part of the movie’s modus operandi, in which a myth of eternal sorrow is eventually moulded to fit the collective mourning of a nation. Don Enrique, it should be noted, is a fictional creation modelled on a real-life Guatemalan dictator, though he could be a stand-in for any number of 20th century monsters. He’s appearing before a war-crimes tribunal, and as witnesses detail the massacres and “anti-guerrilla attacks” he waged against the country’s indigenous population – and the frail old man fails to offer even a hint of acceptance or accountability – you can feel a gradual awakening of some rough beast. Soon, the family’s estate is surrounded by protestors. When a young Mayan woman with silent-movie-star eyes named Alma wanders through the throng and announces she’s the new maid, the family takes her in. And the general’s paranoia, along with everyone’s growing fear that his worry may be justified, begins to peak.

“We must move on for the country to go on,” Carmen explains, then trotting out an extra oldie-but-goodie used for waving away historical atrocities: “The past is in the past.” La Llorona knows that sentence is a convenient lie and knows that viewers probably know it too. The past is always here, sitting right beside us, and so are its ghosts – a concept that Bustamante brilliantly mines for slow-burning dread and a sense of chickens finally coming home to roost. A native of Guatemala who grew up in the mountains and later studied moviemaking in France, the writer-director has said that he makes “activist films in the sense that they show what people don’t want to see,” whether it’s the prejudices faced by the country’s Kaqchikel-speaking Mayan population or its repressive view of homosexuality. Here, he and co-writer Lisandro Sanchez bend the supernatural genre to bring to light buried feelings about the nation’s history of violence, particularly how the Mesoamerican community suffered under so-called anti-Communist purges. The masses outside the family’s mansion hold pictures of “disappeared” relatives and missing loved ones, shouting at the man responsible for these horrors. Eventually, they simply stare at the occupants, a silent legion of human grief.

By that point, the real battle has moved inside the house. Enrique hears voice, which may be coming from the Great Beyond or his own guilt-ridden subconscious. Carmen keeps dreaming of two Mayan children, who may have been real or might just be manifestations of her own complicity.

Natalia has adopted a leftist persona of progressiveness, but she also basks in the privilege that her parents’ crimes have afforded her – and is suffering for the sins of her father as well. Meanwhile, the quiet, watchful Alma is constantly seen in or near water, reminding you of why la llorona was condemned to an afterlife flooded with tears. The fact that she keeps offering to teach Natalia’s daughter how to hold her breath when submerged doesn’t bode well.

And all the while, cinematographer Nicolás Wong Díaz lets his camera creep and snake around a modest dictator’s palace that production designer Sebastián Muñoz gradually turns into something like a symbolic Gothic mausoleum with a few extra rooms, a kitchen and a pool. La Llorona is the kind of tale of mystery and imagination that prefers to get under your skin rather than shock your central nervous system, which only makes its near-suffocating feeling of foreboding more potent. There’s a hint that this reckoning is only the beginning as well – that you can no longer ignore or sweep such things as dictatorships, blind denials and the spirits of the dead under the rug once a certain threshold has been reached. Nor should it, the film suggests. It’s a horror movie that wears its impeccable formalistic spookiness on its sleeve – but confirms that it’s designed to double as a cry of pure of rage.