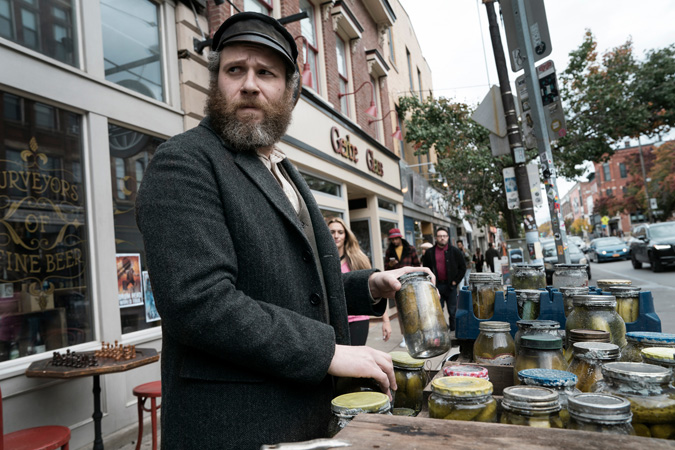 Before it hits a bump in the plot that throws it out of whack, ‘An American Pickle’ rides high on a double dose of Seth Rogen, with the brash comedian plays dual roles separated by a century.

The first is Herschel Greenbaum, a ditch-digger from the fictional Eastern European shtetl of Schlupsk circa 1919, and who sports a Tevye beard that makes him look ready to belt out “If I Were a Rich Man.” Herschel is in love with Sarah, a headstrong beauty who has all her teeth, quite the rarity in Schlupsk. But when Russian Cossacks kill everyone at their wedding except them, the Greenbaums set sail for Ellis Island. They scrape by on Herschel’s salary clubbing rats to death at a Brooklyn pickle factory, and soon, Sarah is pregnant. Snook, an Emmy nominee for Succession, is so good that you feel an aching loss when she leaves the movie – or more accurately, the movie leaves her when Herschel trips into a barrel of brine and winds up pickled for 100 years.

The briny time jump, which preserves Herschel – plus his beard, his vintage shtetl wear and his stubborn old-world attitudes – allows for a hilarious and deceptively subversive culture clash. Herschel loses media steam as a modern miracle when scientists explain him away in terms indecipherable to short attention spans. That leaves him in the care of his only living relative: A faith-challenged, great-grandson named Ben, whose spacious Williamsburg apartment leaves Herschel agog. There are also the wonders of smartphones, iPads, and Alexa playing the doo-wop hit “Stay.” Still, nothing rocks Herschel’s world like Ben’s very own seltzer maker.

Since the fish-out-of-water jokes can go only so far, An American Pickle quickly goes for the heartstrings. It seems Ben’s parents have died in a car crash, leaving him with insurance money to afford his apartment and finance the five years it’s taken him to develop an app aimed at ethical consumers. Herschel is sceptical that’s a big audience, but devastation hits when Ben takes him to the rundown cemetery where Sarah’s grave is being bulldozed to make way for a billboard advertising Russian vodka. With visions of Cossacks dancing like devils in his head, Herschel determines to earn the money to buy the plot and obliterate that billboard. How will he do that? Herschel will make his own pickles from discarded cucumbers and rain water, with the result being a herd of hipsters hailing him on social media as an artisanal genius. Herschel’s success stirs schadenfreude in Ben, who loses funding for his app and wants to lash out.

Suddenly it’s a family war with Ben making sure the world knows about his great-grandfather’s views on women, homosexuals, and the virgin birth. And the revenge plot, leading to deportation charges, nearly grinds to the film’s gentle momentum to a halt. Screenwriter Simon Rich, a former SNL writer, made the material sing when his four-part novella Sell Out was published in the New Yorker in 2013. But the transitions on screen feel blunt and off-putting, making the film seem long even at a scant 88 minutes. This could be due to the inexperience of first-time director Brandon Trost, the gifted cinematographer who worked with Rogen on several films, including This is the End, The Interview, The Disaster Artist, and two Neighbours comedies. Though the star’s affinity for new talent is admirable, the sudden shifts in tone and the arid dead spots give this movie a shapelessness that challenges your attention instead of rewarding it. Still, a movie that even glancingly grapples with questions of ethnic and spiritual identity, past and present, is hardly hack work. It’ll do in a pickle.