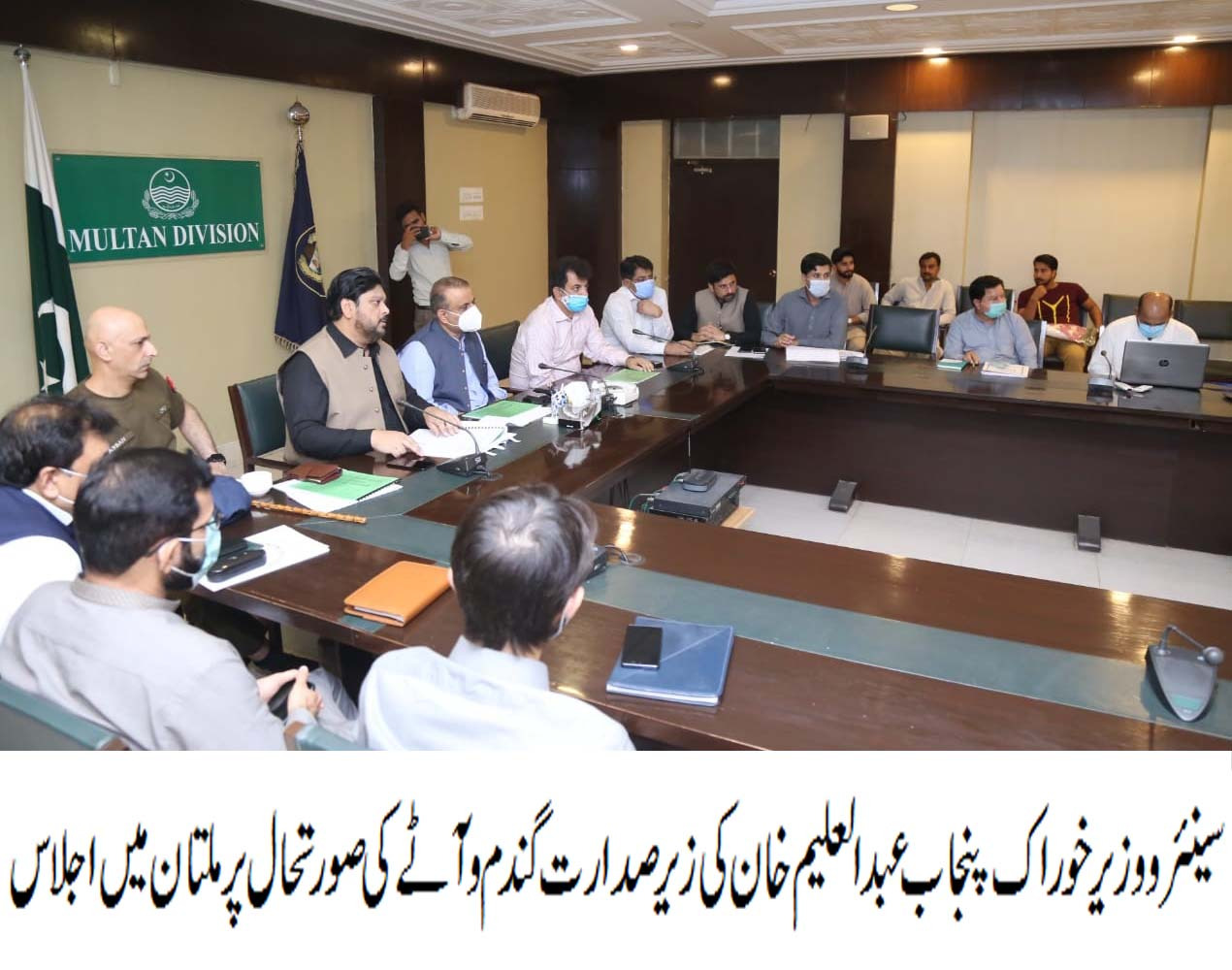 LAHORE: Senior & Food Minister Punjab Abdul Aleem Khan has ordered the immediate sealing off the flour mills which are buying wheat at low rates from Government and after grinding, selling flour in other provinces at high prices. He said that official wheat quota of such flour mills should be stopped immediately and irrespective of how influential someone is, no concession should be made, as well as, strict disciplinary action taken against the administration of such flour mills. He stated that it was after detailed consultation with the flour mills, that the price of 20 kg bag of flour was fixed at Rs.860, among other important decisions, hence, after these steps, there was no justification left to illegally transfer this low-cost flour to another province or city for illicit profit. Abdul Aleem Khan, during his visit to Bahawalpur and Multan districts, also directed the Food Department officials to adopt a joint strategy along with local administration to take immediate action and identify the violating flour mills. 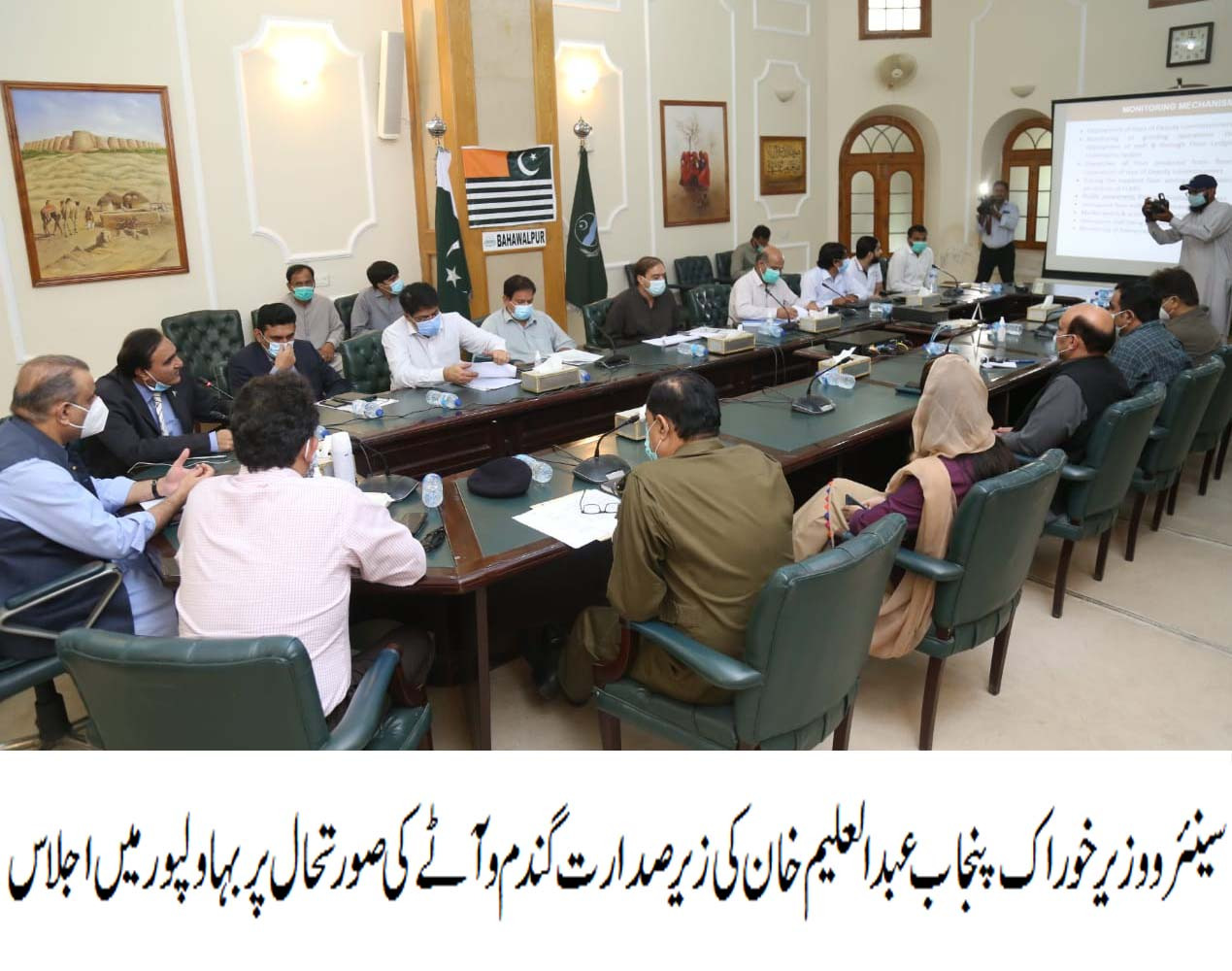 He clarified that the relief of billions of rupees’ subsidy must reach to the common man and any hindrance in this regard will be taken into account and the matter will be dealt with swiftly. Senior & Food Minister Abdul Aleem Khan also said that at present 95% of the areas had a 20 kg bag of flour at Rs. 860 and 10 kg bag at Rs. 430 in abundance and the sale of this flour was obligatory on every shopkeeper as well. He said that there should be stern action against hoarders and they will be dealt with iron fists on illegitimate profiteering. Senior & Food Minister Abdul Aleem Khan instructed the Food Officers to go out in the field themselves and inspect the working of the flour mills on the spot. He declared that Prime Minister Imran Khan had given clear instructions in this regard that there should be no hurdles in providing basic necessities like flour to the common man. He added that, he himself has decided to visit different districts to review the exact situation and that he will also tour Faisalabad, Gujranwala and Sialkot in the next phase. Senior and Food Minister Abdul Aleem Khan was also given a detailed briefing on the situation of wheat and flour by the Divisional Administration and Food Department in Bahawalpur and Multan and was apprised of the current situation.

Meanwhile, talking to the media, Senior and Food Minister Punjab Abdul Aleem Khan said that the supply of 20 kg bags of flour at Rs. 860 was successfully underway in most of the areas. He expressed that he had also appealed to Chief Minister and the Sindh Government that, like Punjab and KPK, they should also start supplying subsidized wheat to flour mills so that a uniform price of flour could be fixed across the country. The artificial shortage is related to price fluctuations, and, as soon as a truck of flour enters Sindh from Rahim Yar Khan, its price increases significantly. He told the media, that instructions had been issued to balance the ex-mill price of sugar along with flour and that they will try to fix the price of sugar by consulting with all involved parties. Abdul Aleem Khan clarified that he had given clear targets during his visit to Bahawalpur and Multan and, henceforth, strict disciplinary action would be taken on any negligence. Talking to media in Multan, Senior & Food Minister said that the Punjab Government was spending a huge amount of Rs. 5 billion per month on subsidy for low price flour and would not allow mills to be complacent after that. The Food Secretary is also starting consultations for the price of sugar next week, Food Minister told he appealed to the mill owners to reduce the rate of profit from the people. Abdul Aleem Khan said that Khyber Pakhtunkhwa was disbursing wheat to flour mills on subsidized rated after the instructions by Prime Minister Imran Khan. He said that the supply of wheat to the flour mills at subsidized rates should also be started in Sindh by its Government and mercy on the people there and reduces the burden on Punjab by providing wheat to the flour mills at lower rates which will decrease the rate as well.