The Government of Pakistan and UNHCR, the UN Refugee Agency paid tribute to an Afghan refugee student who secured second position in the matriculation exam carried out by the Mardan board, Khyber Pakhtunkhwa. 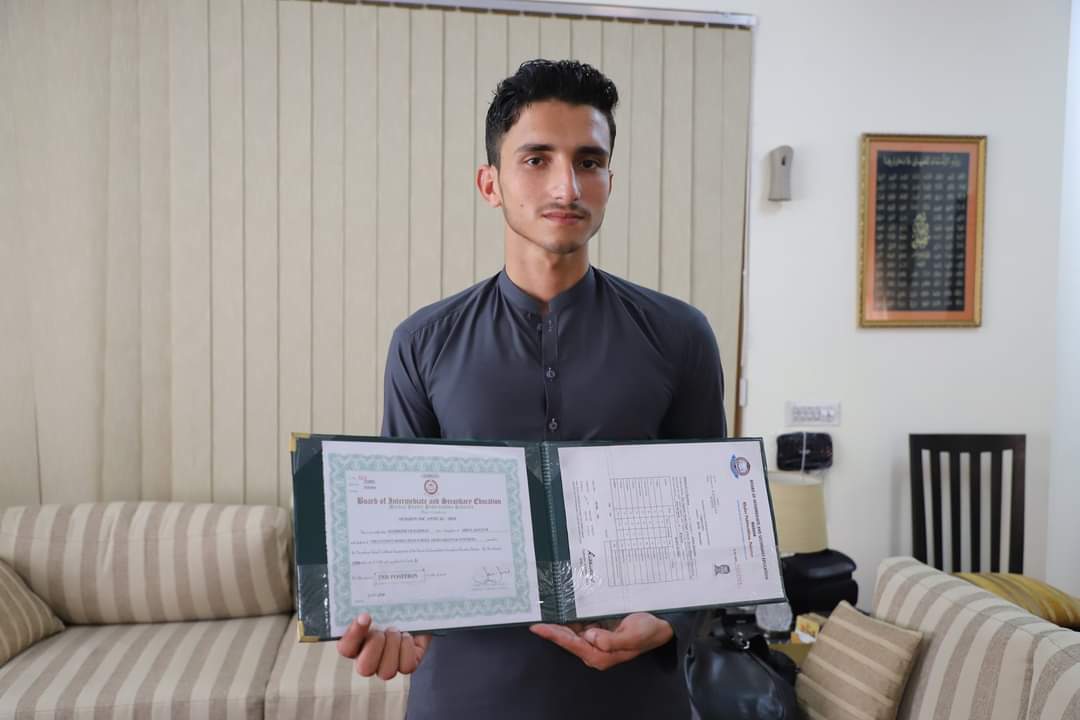 The 16-year-old Mehboob-ur-Rehman obtained a mark of 1090 out of 1100 – a great achievement. Mr. Rehman lives with his family at Manzlara refugee village in Nowshera. His father sells fruit at a local market to make ends meet.

“Mehboob-ur-Rehman deserves to be praised for this outstanding performance. We’re proud of bright students like him who are passionate about achieving their dreams,” said government officials from the SAFRON Ministry at a ceremony held in Islamabad in honour of the refugee student.

The ceremony was also attended by the UNHCR Representative in Pakistan, Ms. Noriko Yoshida, the School Principal, Mr. Mohammad Israr, and family members of Mr. Rehman.

The government officials expressed appreciation for the young student’s hard work and dedication and said this great achievement will prove a significant step in his future success. “The people and Government of Pakistan wish you a successful life ahead,” they added. The officials said that the Government of Pakistan has been committed to imparting quality education to all Afghan students for the last forty years.

“We have provided full access to Afghan students as every child is entitled to a quality education regardless of their race, religion and nationality,” they noted, adding that such practices are also in line with the Government’s pledge to support the 2030 Sustainable Development Agenda, which advocates for quality education for all.

They said that the local teachers in Pakistan also deserve appreciation for making special efforts in providing quality education to Afghan students. “The Government and the people of Pakistan equally celebrate and feel proud of both Afghan and Pakistani students’ achievement and success,” they said.

Mr. Rehman expressed his dream of becoming a doctor someday. “I will continue my studies, and I hope that I will achieve my dream,” he said.

Speaking at the occasion, UNHCR Representative in Pakistan, Ms. Noriko Yoshida congratulated the student for securing the second highest position. “Students like Mehboob-ur-Rehman are a symbol of hope, inspiring many people, especially refugee communities,” she said.

She noted that one of the UNHCR’s priorities in Pakistan is youth empowerment through investments in education and skills development, as over 60 per cent of Afghan refugees are below the age of 25.

“Educated youth are the future of Afghanistan and will play a vital role in rebuilding their country,” she added.

The young refugee student was rewarded with a laptop and a cash prize at the occasion.