Islamabad District and Session Court Additional Sessions Judge Nasir Javed Rana on Wednesday dismissed the allegations leveled against Senator Rehman Malik by Cynthia Dawn Ritchie. During the hearing of the case, Cynthia Ritchie and her lawyer could not prove those allegations she had been making in front of the media in court. 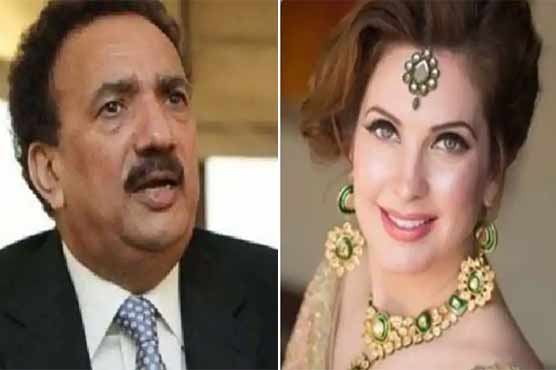 The honourable judge, after hearing both the parties and their counsels rejected Cynthia Richie’s allegations and dismissed her application which she had filed under 22A.

It may be recalled that the police after thorough investigation had earlier vindicated Senator Rehman Malik of all baseless and fabricated allegations. Police maintained that allegations levelled by Cynthia Dawn Ritchie were baseless, malicious, pleasures, false and frivolous as she failed to give any proof and evidence in support of her allegations.

It was observed that Cynthia Richie kept changing her statements from day one and tried to mislead the courts. Her application filed in Thana Secretariat states that the incident of rape took place in May 2011 while before the court today she contradicted that it took place in the month of July 2011.

After the verdict, Senator Rehman Malik received congratulatory calls from friends and party workers.  He said that he is thankful to Allah Almighty that he was exonerated from all the fake charges today.

He said that it was case of the honor and respect of his leader Shaheed Mohtarma Benazir Bhutto Shaheed that he took suo moto notice on her highly defamatory and objectionable tweet.

He said “I am grateful to the people of Pakistan, leadership and worker of PPP who supported me in this fight against fake charges which were just aimed at to malign me but now the truth has prevailed”. He said that it is lesson to all those who level false allegations that truth prevailed.

He added that it is his and the vindication of his party and a message that man proposes and God disposes. He is likely to speak to the media soon to expose the conspiracy against him and other party leadership.