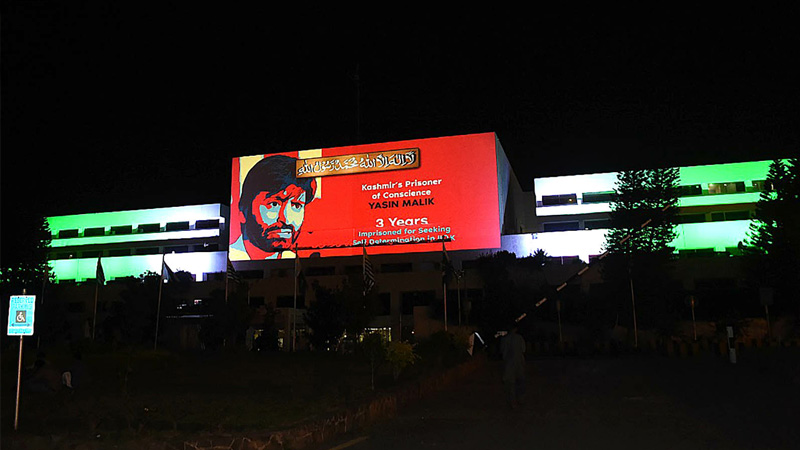 Expressing strong support for the Kashmiris’ right to self-determination, Foreign Minister Shah Mehmood Qureshi on Tuesday said the Pakistani nation, including the political and military leadership, has the same stance on the Kashmir issue.

Foreign Minister Qureshi said Pakistan has exposed the ongoing human rights violations in the Indian Illegally Occupied Jammu and Kashmir (IIOJK) at every international forum. He mentioned that India tried to change the demographic ratio in the IIOJK by amending the domicile laws, terming it a ‘clear violation of international law’. He said all the political parties of Pakistan are united on the Kashmir issue. He said following the footsteps of the Rashtriya Swayamsevak Sangh (RSS), the Bharatiya Janata Party government because of its Hindutva thinking has sowed the seeds of hatred in the hearts of Kashmiris and minorities living in India. He stressed that India could not demoralize unarmed Kashmiris despite continuous torture and imprisonment. Today, the real face of the Indian government has been exposed to the world, he said, adding that Pakistan will continue to support its Kashmiri brothers until they get their due right to self-determination.

In response to the call of the government, all is set to observe the first anniversary of the August 5, 2019, day as Youm-e-Istehsal by the people of Jammu & Kashmir dwelling both sides of the Line of Control and rest of the world. The Youm-e-Istehsal will be observed throughout Azad Jammu & Kashmir, Pakistan and rest of the world by the overseas Pakistanis and Kashmiris to condemn the illegal, immoral, and inhuman action of the 5th August, 2019.

In Azad Jammu Kashmir, the day will be marked with the mass anti-India protest rallies and processions at all small and major cities and towns across the liberated territory including the capital city of Muzaffarabad against the above unilateral Indian action stabbing the special status of the disputed IIOJK this day last year at the gun point – denying all international norms and commitments.

The Prime Minister of Pakistan Imran Khan will address the Azad Jammu and Kashmir legislative Assembly and will also lead a protest rally in Muzaffarabad, an official handout issued by AJK Government said. AJK President Sardar Masood Khan, AJK Prime Minister Raja Farooq Haider Khan, Federal Ministers and AJK cabinet ministers will participate the protest rally. In Muzaffarabad, a big protest rally will be taken out from Domail which will culminate at the UN Observer Mission. The AJK prime minister will lead the rally, to be attended by AJK cabinet ministers, representatives of APHC, leaders of the political parties and representatives of civil society. Indian authorities have issued the order to impose a ‘full curfew’ in occupied Kashmir, a day before the one-year anniversary of August 5 when the Modi-led government stripped the region of its autonomy.