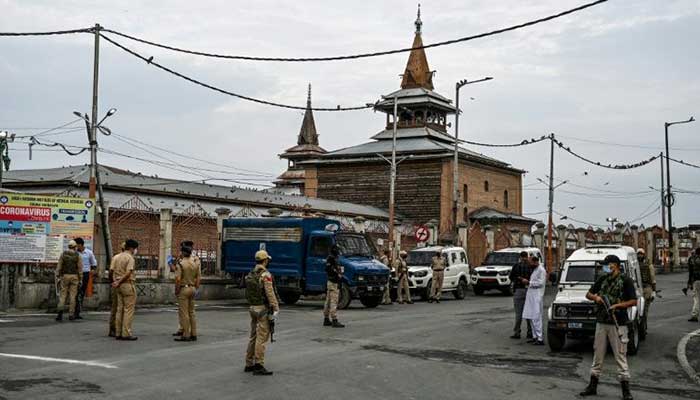 Indian authorities on Monday night issued the order to impose a “full curfew” in occupied Kashmir, a day before the one-year anniversary of August 5 when the Modi-led government stripped the region of its autonomy, generating widespread criticism and rebuke.

Officials announced a two-day “full curfew” citing intelligence reports of looming protests in the Muslim-majority region of seven million people, where locals have called for the anniversary to be marked as a “black day”.

Police vehicles patrolled the main city Srinagar after dark on Monday and again on Tuesday morning, with officers using megaphones to order residents to remain indoors.

A “full curfew” means people can only move around with an official pass, usually reserved for essential services such as police and ambulances.

The Himalayan region is already subject to restrictions to reduce the spread of the coronavirus, with most economic activities limited and public movement curtailed.

On Monday morning, new razor-wire and steel barricades were placed on main roads on Srinagar, and on Tuesday thousands of government troops fanned across the city and surrounding villages.

“Police in vehicles moved through our locality and from loudspeakers ordered us to stay indoors for two days — as if we were not already caged,” said Imriyaz Ali, who lives in the Srinagar old town.

“I saw mobile phones of two of my neighbours taken away by soldiers when they got out to buy bread from a local baker early in the morning,” said one villager by phone from Nazneenpora village.

For locals, the new curfew brought back memories of the weeks-long clampdown a year ago.

Then, a total communications blackout was imposed, with phone and internet access cut and tens of thousands of fresh troops moved into the valley — already one of the world´s most militarised regions.

Around 7,000 people were taken into custody — including three former chief ministers. Hundreds remain under house arrest or behind bars to this day, mostly without charge.

Kashmir has been split since 1947 between India and Pakistan, both of which claim it in full. it has been the spark for two wars between the arch-rivals.

The move, which has been accompanied by an upsurge in violence that is set to make 2020 the bloodiest year in a decade, has triggered major economic hardship exacerbated by the coronavirus pandemic.

Many locals are also angry that for the first time, people from outside Kashmir are being granted rights to buy land, fearing that India wants to change the region´s demographic makeup.

“Indian government claims that it was determined to improve Kashmiri lives ring hollow one year after the revocation of Jammu and Kashmir´s constitutional status,” Meenakshi Ganguly from Human Rights Watch said in a statement.

“The authorities instead have maintained stifling restraints on Kashmiris in violation of their basic rights.”