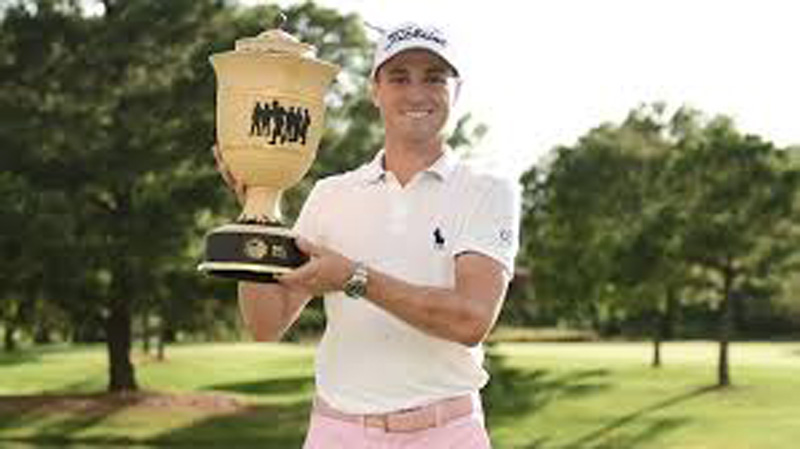 MEMPHIS: Justin Thomas clinched his 13th PGA Tour victory on Sunday, winning the WGC FedEx St. Jude Invitational by a three-stroke margin and claiming the world number-one ranking in the process. The 27-year-old American put up a near-flawless, five-under par 65 to win at TPC Southwind in Memphis, Tennessee, with a four-way tie for second place between Americans Daniel Berger, Phil Mickelson and returning champion Brooks Koepka, as well as England’s Tom Lewis. Thomas and Koepka, who were 202 and 201 through 54 holes, respectively, went toe-to-toe in the final round, with Koepka draining a more than 39-foot putt for birdie on 17.

But Thomas, who locked in four birdies on the front nine, kept his nerve for the win, his first since the tour returned from a coronavirus hiatus. The win cut short Jon Rahm’s reign at the top of the rankings, with the 25-year-old Spaniard spending just two weeks as the world number one. “It was a hard-fought day,” said Thomas. “Besides that terrible wedge on 12, I played so well for 14 holes. I drove the ball just perfectly … I realistically could have birdied my first 10 holes today and that is kind of bizarre to say.” Any hope Koepka had of claiming a last-minute victory evaporated on 18, as he drove his ball into the water for a double-bogey. An electrifying performance with five birdies on the front nine helped Lewis (66) to surge up the leaderboard in early play on Sunday, after he carded nine-under par 61 on Saturday, but a pair of bogeys on 13 and 17 had him settling for second. Brendon Todd, the leader heading into Sunday, carded a disastrous five-over par 75, losing his edge and shooting three straight bogeys on 13 through 15. Rickie Fowler started the day in contention for the win but finished the final round with a disappointing three-over par 73, thwarting his attempt to pick up his first PGA Tour victory since last year’s Waste Management Phoenix Open.