IF PUNJAB & KP CAN PROVIDE CHEAP FLOUR THEN WHY NOT SINDH? 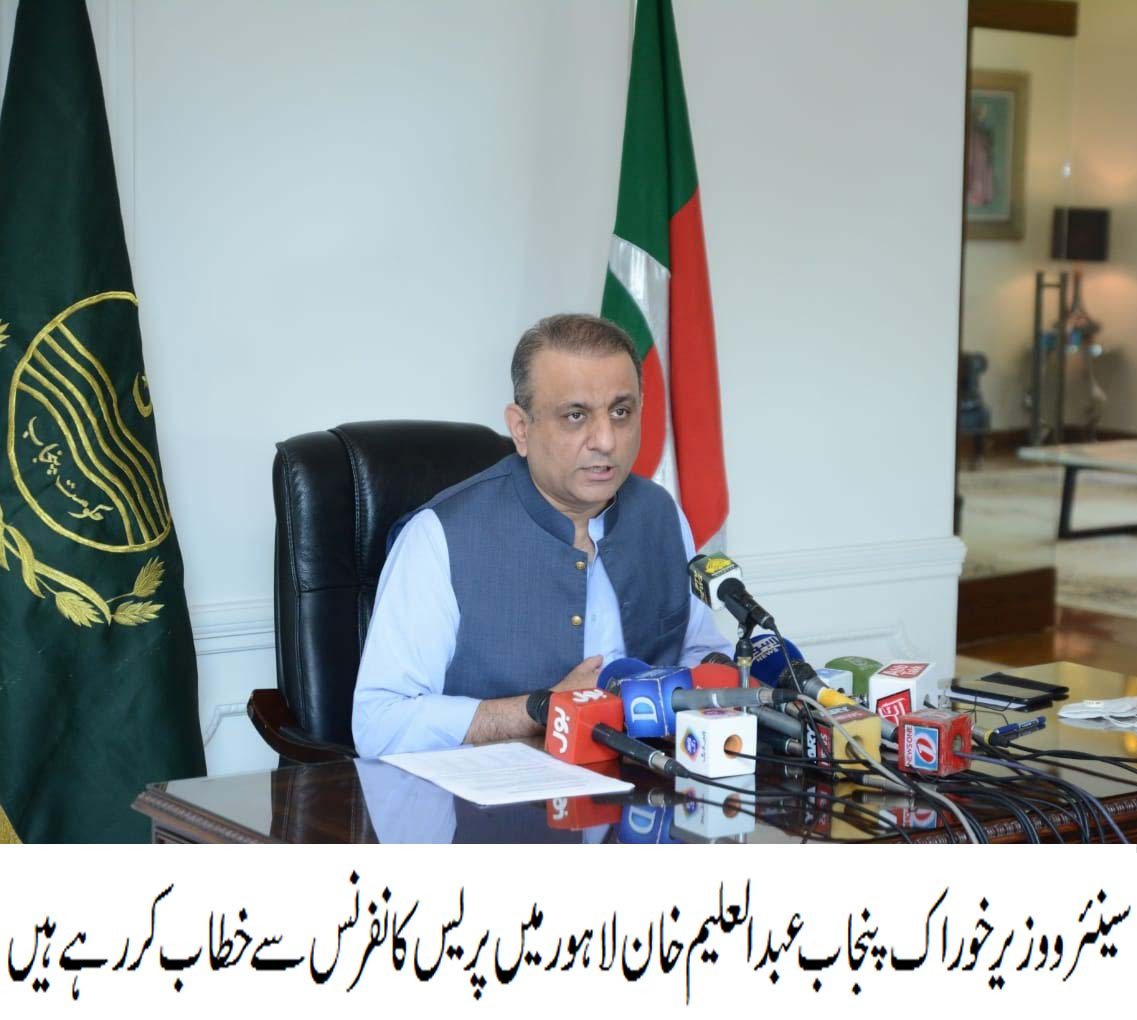 LAHORE: Senior & Punjab Food Minister Abdul Aleem Khan has asked Sindh Government to immediately give up its indifference, show mercy to people and provide wheat to flour mills at subsidized rates on the lines of Punjab and KPK. He said that the supply of wheat at low rates should be started in Sindh so that the gap in flour prices could be bridged. He added that after the supply of Government wheat to flour mills at low rates across Punjab, a 20 kg bag of flour was available at Rs. 860 but when it crossed Rahim Yar Khan and entered into Sindh, it was sold at more than Rs. 1,200. He also said that, according to the Constitution of Pakistan, no province could stop the inter-provincial transportation of wheat or flour, so Punjab has had to bear this burden.

Addressing a press conference here in Lahore, Abdul Aleem Khan said that Sindh has huge reserves of wheat, while flour mills are not getting subsidized wheat due to negligence of the Sindh Government, while Punjab has been spending billions of rupees in this regard, and after the instructions of Prime Minister Imran Khan, the supply of wheat to the flour mills in KPK has also started on subsidy, but the transfer of the same wheat and flour to Sindh has been creating problems. Abdul Aleem Khan appealed to Sindh Chief Minister Syed Murad Ali Shah to immediately intervene in the matter and ensure supply of wheat to flour mills in Sindh at low rates and decrease the price of flour at Punjab level. He insisted that if Punjab and KP could provide cheap flour then Sindh Government could do so, as well?

Senior Minister for Food Abdul Aleem Khan also stated that 17,000 tons of wheat was being supplied to flour mills in Punjab daily which had been increased to 32,000 tons during Eid days. He mentioned that they had 10 months stock and In Sha Allah wheat should start being imported before December in which Punjab’s share would be 7 to 8 lakh tons. He said that so far orders had been issued to import 4.44 lakh tons of wheat. Punjab is to extend cooperation for the people of other provinces but those provinces have yet to show responsibility themselves. He clarified that flour is being supplied at low rates and a 20 kg bag is available in abundance everywhere in Punjab at Rs. 860 and, apart from the Food Department, the Urban Unit has also been monitoring the process. The Deputy Commissioner takes immediate action wherever there is a complaint. Abdul Aleem Khan hinted at a change in the method of subsidy on flour in Punjab and said that work on it has already started and a new strategy will be devised in the next few months under which only deserving people will be given low rates atta, which, in turn, will make the 860 bag more cheap and help for this targeted subsidy can be availed from the data of Ehsas Program.

He clarified that the atta at Chakkis was in line with the market rate as wheat is not provided there at the official rates. Replying to a question, Abdul Aleem Khan said that wheat production has been reduced in Upper Punjab due to rains and other factors. The Punjab Government did not provide wheat to non-functional flour mills this year at subsidized rate while the Food Department has completed procurement of more than 4 million metric tons of wheat, which is a record, and in this process the farmers were paid in one day, while there was no difficulty in the provision of bardana. He vowed that such efforts would continue in order to improve the Food Department as per the vision of Prime Minister Imran Khan and major changes will be brought in the coming days.