Interlude: Kashmir During a Pandemic

It is not without good reason and with quite some trepidation that Pakistan has, time and again, sought the assistance of the international community of nations to streamline the conflict in Kashmir. The time to do so is more urgent now than ever before, given the waning regional and international focus on conflict resolution in Kashmir at the looming cost of a passive acceptance of socio-political realities. This is simultaneous to an increase in India’s incorrigible pursuit of illegitimate power in the region, the brunt of which Kashmir has suffered. The use of the word “interlude” is not suggestive of a respite in political and humanitarian realities in Indian occupied Kashmir but is rather insinuative of the forsaking of the plight of Kashmiri people during a time when conflict zones are perhaps most vulnerable to the spread of contagion.

For an immeasurably brief but a significant period in eternity, states retracted into their insecurities in a manner not seen before since the onset of the most recent wave of globalisation. As it wakes to the gravity of the implications of the pandemic in areas that, even before the world shut down in March, were deprived of basic healthcare facilities, Kashmir has yet to register itself as the proverbial “talk of the town.”

Kashmir failed to merit, even a passing reference in a special and quite a comprehensive report published by the Crisis Group, titled “COVID-19 and Conflict: Seven Trends to Watch.”

The doctor-to-patient ratio in Indian Occupied Kashmir stands at 1:3866 and the Valley is host to one of the highest military-to-civilian ratios in the world

Such a lack of recognition is troublesome on four notable accounts; the dearth of equipment and medical personnel to tend to increase healthcare needs, the inevitable unaccountability of violations of international humanitarian law, lack of preemptive planning to subdue a crisis of the scale of the coronavirus in the future, and the convenience in the passage for the Indian narrative to retain pertinence, without question.

The doctor-to-patient ratio in Indian Occupied Kashmir stands at 1:3866 and depending on what source is quoted, the Valley is host to one of the highest military-to-civilian ratios in the world. Absolute figures are a recondite reality in Indian held Kashmir, which in its own is a lesson in censorship, but the algebra is staggeringly skewed to reflect. Even in these times, India’s governing narrative in Kashmir ostensibly does not include basic human welfare as a leading priority. 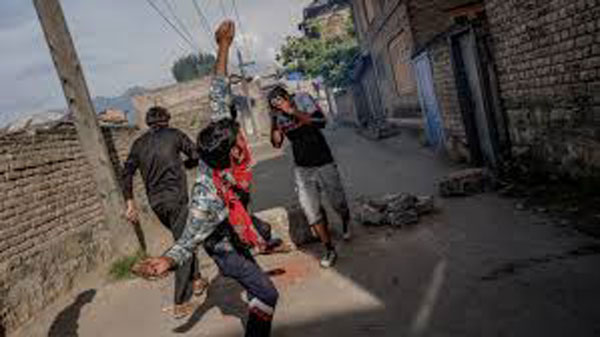 A little more than a couple of weeks ago, 48 political prisoners at the Anantnag District Jail in Indian Occupied Kashmir were diagnosed with the coronavirus. Given the large number of “arbitrarily detained prisoners,” and stringent censorship, which deters transmission of accurate information, it stands to reason that figures might be a lot more worrisome than are revealed.

Considering that the proportion of medical personnel to civilians in the valley is not adequate to control the virus if it begins transmitting uncontrollably, the healthcare infrastructure that does exist will be damaged irreparably, not fit enough to curb the Virus.

The International Committee of the Red Cross’ COVID rendition of the International Humanitarian Law for detainees cites “health and hygiene” as the most important measures to protect such vulnerable segments of the population from getting infected. They are to be provided with effective medical care and sanitary services in addition to ensuring context-specific physical distancing. The very nature of arbitrary arrests, especially enforced by a government bent on deracinating the local population, inevitably leads to overcrowded jails, violating each of those principles.

Besides, it falls upon the Indian government to ensure that the public at large has access to important information. That, however, is a provision far from being conceivable under the current state of affairs wherein limited internet services have only very recently resumed. It is important to note, however, that internet services have not been restored in full and there remain several constraints for people in Kashmir in interacting with the world beyond their borders. Lack of information flows from medical professionals inside the valley and disruption in communication flows externally will only exacerbate the situation at hand.

Furthermore, and equally importantly; the state of education is in disarray. Children in Indian Occupied Kashmir have been deprived of their right to education since August 5th, 2019 and right about the time when the psychological impact of not being able to attend school out of fear of violence was becoming a part of the discourse on the state of education in Kashmir, the pandemic gave the Indian security forces more reason to keep schools shut. Needless to mention, it is even more difficult for schools in conflict zones to shift to more modern modes of schooling, wherein internet services are not a given.

One can be forgiven for thinking that the provision of basic services in circumstances that the world finds itself if, is a matter for debate only in functioning democracies, or those with developed political and financial institutions. Indian occupied Kashmir has undergone decades of unregistered and unaccounted for political and humanitarian violations, which make it a region far from being one conducive to transparency and accountability in governance. One cannot, however, be forgiven in isolating the rhetoric from the very reality it has transpired into. For that rhetoric has given way to decades of suppression, marginalisation and negligence. Amit Shah, the Indian Minister of Home Affairs has audaciously waived humanitarian and censorship concerns previously. Such rhetoric, however, is not unexpected. What is indeed astounding is that the international community is yet to realise the implications of downplaying such a narrative.

Instead, questions of immediate importance must be asked of the Indian government; questions aimed at understanding India’s long-term plan for the restoration of services to society and the nature of accountability for its actions before and following August 9, 2019, in Kashmir. It is only after a true assessment of the physical and psychological impact on Kashmiri society, can effective governance in the valley even be conceived.