Tension between the US and China – the top two economies of the world – has sharply escalated reminding many of the 20th century cold war between the former Soviet Union and the US. 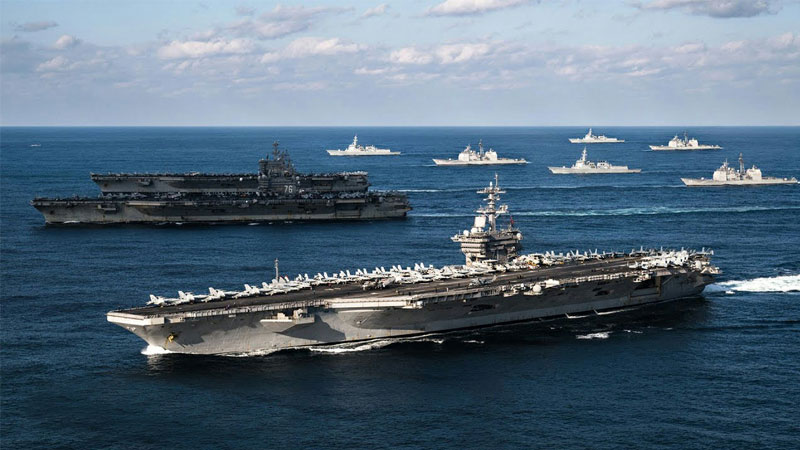 Citing alleged intellectual property theft and in the name of ensuring security of the its citizens, the US government ordered China to close its Consulate-General at the Huston, Texas. The US justice department has also accused China of sponsoring hackers to target labs developing COVID-19 vaccine. Two Chinese citizens have been indicted in alleged stealing of the research regarding COVID-19 vaccine. China strongly condemned the US actions calling them unprecedented escalation and vowed to retaliate. Later, Beijing also ordered Washington to shut Chengdu consulate. Earlier, the Trump administration also sanctioned Chinese technology-giant Huawei – the world’s No one telecom supplier and No two mobile phone manufacturer. President Donald Trump had also asked US allies to take tough measures against the Chinese top tech-company. Following Trump’s footsteps, UK Prime Minster Boris Johnson has also ordered the removal of Huawei from the UK 5G network.

Why is the US in combative mood? For this we need to have a look at the bilateral ties between the two countries. Following Mao Zedong’s successful revolution in China in 1949, the United States steadfastly refused to recognize the new communist regime. Instead, America continued to recognize and supply the Nationalist Chinese government that had been established by Chiang Kai-shek on the island of Taiwan. In 1950, during the Korean War, U.S. and PRC armed forces clashed. During the 1960s, the United States was angered by PRC support and aid to North Vietnam during the Vietnam War.

By the 1970s, however, a new set of circumstances existed. From the US viewpoint, closer relations with the the PRC would bring economic and political benefits. Economically, American businessmen were eager to try and exploit the huge Chinese market. Politically, US policymakers believed that they could play the “China card”-using closer diplomatic relations with the PRC to pressure the Soviets into becoming more malleable on a variety of issues, including arms agreements. The PRC also came to desire better relations with its old enemy. It sought the large increase in trade with the US that would result from normalized relations, and particularly looked forward to the technology it might obtain from America. The PRC was also looking for allies. A military showdown with its former ally, Vietnam, was in the making and Vietnam had a mutual support treaty with the Soviets.

Then US secretary of state Henry Kissinger flew on secret diplomatic missions to Beijing in 1971. President Nixon visited China in 1972 to end 25 years of no communication or diplomatic ties between the two countries. This was a key step in normalizing relations between the US and China. Nixon visited China to gain more leverage over relations with the Soviet Union. The normalization of ties culminated in 1979, when the US established full diplomatic relations with the PRC.

According to statistics released by the International Monitory Fund and World Bank, China will replace the US as the world’s largest economy in 2024

Ever since normalizing relations with the US, China has always focused military, economy and technological development and progress. It has followed a policy of non-confrontation that allowed it make tremendous economic and military progress. In 1992, China managed to become world’s tenth largest economy of the world. During the last three decades, when the US was busy fighting wars all over the world, China silently progressed. It didn’t challenge the US-led world order, nor it embroiled itself in futile wars. The strategists in US believe to integrate China into liberal world order. China took full advantage of this illusion. The world has been anticipating China’s rise for decades as a major global power. Now, China has emerged at the global scene as country ready to replace US as superpower. Right now China is the second largest economy of the world after US.

According to statistics released by the International Monitory Fund and World Bank, China will replace the US as the world’s largest economy in 2024. Therefore, the pain US is going through can be termed as the birth pangs of a new world order lead by China.

The US has been in combative mood vis-à-vis China ever since Trump became the president of the US. He imposed tariffs on Chinese imports, responding to which China also imposed tariffs on the US imports. Then both countries signed the phase one deal. In the past China followed a policy of non-confrontation. However, no more. Now, China has been retaliating every step her rivals have taken against her. Just recently, when the US had flexed its military muscle in the South China Sea, China responded back conducting its own military exercise in the strongly ocean. China also had a violent clash at the Ladakh at the Line of Actual Control with India. This marks the significant change in Chinese decades-old approach of making peaceful economic progress with getting involved into regional or global conflicts. Now, not only China is strongly retaliating, it has started to actual challenge the US and its allies. The proposed long-term strategic partnership with Iran is the best manifestation of Chinese new approach in global geopolitics.

The US has read the writing on the wall that Beijing will replace it very soon as the world super power. According to the IMF and the World Bank projections, China will surpass the US with respect to the GDP growth by 2024 to become the largest economy of the world. Washington has decided to use its full might to stop China dreaming coming true. Therefore, in the coming years the escalation between the two countries would escalate further deteriorating the bilateral ties and will increase polarization in the world.