* On Wednesday, July 8, Rivera's 4-year-old, Josey Dorsey, was found alone on the pontoon boat she rented that day 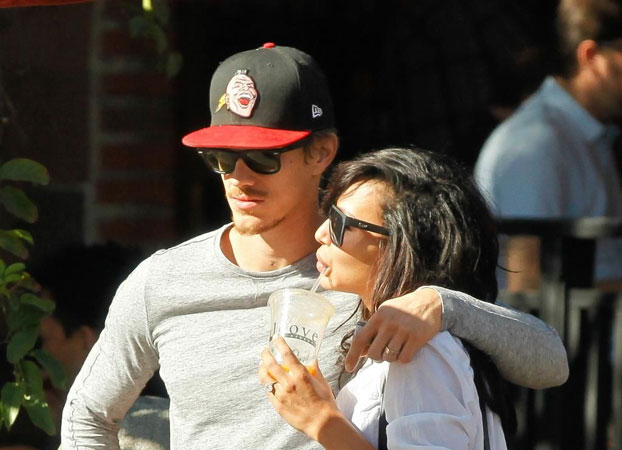 The world is still mourning the loss of Naya Rivera. On Monday, July 13, the Glee alum was confirmed dead by authorities. The tragic news came five days after the 33-year-old actress went missing at Lake Piru in California.

On Wednesday, July 8, Rivera’s 4-year-old, Josey Dorsey, was found alone on the pontoon boat she rented that day. Law enforcement reassured the public that the toddler was discovered “unharmed.”

Almost two weeks following the news of Rivera’s death, her ex-husband and the father of her child is breaking his silence. Ryan Dorsey expressed his heartache over the tragedy and how he hopes to keep the singer’s memory alive.

“This is so unfair…there’s not enough words to express the hole left in everyone’s hearts,” Ryan began his message on Instagram on Saturday, July 25. “I can’t believe this is life now. I don’t know if I’ll ever believe it. You were just here… We were just in the back swimming with Josey the day before. Life just isn’t fair. I don’t know what to say…I’m thankful for our times and our journey that brought us together and gave us the sweetest and kindest smart little boy we could ever hope for.”

Almost two weeks following the news of Rivera’s death, her ex-husband and the father of her child is breaking his silence. Ryan Dorsey expressed his heartache over the tragedy and how he hopes to keep the singer’s memory alive

“I remember sometimes you used to get annoyed at me: ‘Ryan can you stop snap chatting!’ Haha,” Ryan recalled. “I’m glad I didn’t listen to you because I have hundreds and probably thousands of snaps and videos that Josey will have forever and know his momma loved him more than life, and how much fun we had together as he was growing up.”

He continued, “Life is all about good times and bad times but with Josey it makes the bad a little less so because a part of you will always be with us. He’ll never forget where he came from. We miss you. We will always love you. Love you Meep.”

Before closing, Ryan thanked everyone for their overwhelming support and love during this time.

“I’ll just say in closing, be kind to yourself, be kind to others, forgive…forget…don’t hold grudges….if you have nothing nice to say maybe try not to say anything,” he shared. “There’s peace in silence. Time on Earth is precious and you just never know….you never know what could happen. Hold your loved ones close, and cherish the times you have with those you care about.”

The weekend before Naya was confirmed dead, Dorsey was spotted out on Lake Piru with his ex-wife’s family. TMZ reports the 36-year-old actor got into the water on Saturday, July 11, and was later seen taking a moment to himself as authorities continued their search for Rivera.

A source recently told E! News the former couple had been on good terms, especially when it came to looking after their son. They were both “really good about co-parenting” and stuck to a “routine,” the source shared.

“She finally had a great co-parenting system worked out, and she seemed genuinely happy,” a separate insider reiterated. “She was excited for new beginnings this year.”

Rivera and Dorsey tied the knot in 2014 and welcomed their baby boy a year later. However, the two decided to go their separate ways and officially divorced in 2016.

“We are confident, based on the circumstances, she was not a victim of foul play. There is no indication of this being an abduction or a homicide. There is also nothing to indicate it was a suicide either,” Capt. Eric Buschow previously told E! News.

Ventura County Sheriff, Bill Ayub, added, “We believe it was mid-afternoon when she disappeared, the idea perhaps being that the boat started drifting, it was unanchored, and that she mustered enough energy to get her son back onto the boat, but not enough to save herself.”

Additionally, Ayub explained that Josey helped authorities with his mother’s case. “Her son described being helped into the boat by Rivera, who boosted him on to the deck from behind. He told investigators that he looked back and saw her disappear under the surface of the water,” Ayub said.

Sharing the same sentiments, Buschow told us, “Kids that age, they are going to be very matter of fact in providing information. And he was. He was able to provide information that was very helpful to investigators.”

Dorsey hasn’t been the only person close to Rivera to express his heartache over her loss. The actress’ former Glee co-stars paid tribute to her with special messages, including Chris Colfer, Jane Lynch, Jenna Ushkowitz and so many others.

“There are no words and yet so many things I want to say, I don’t believe I’ll ever be able to articulate exactly what I feel…,” Jenna wrote. “You shined on stage and screen and radiated with love behind closed doors. I was lucky enough to share so many laughs, martinis and secrets with you. I cannot believe I took for granted that you’d always be here.”

“Our friendship went in waves as life happens and we grow, so I will not look back and regret but know I love you and promise to help the legacy of your talent, humour, light and loyalty live on. You are so loved,” she continued. “You deserved the world and we will make sure Josey and your family feel that every day. I miss you already.”

“How can you convey all your love and respect for someone in one post? How can you summarize a decade of friendship and laughter with words alone? If you were friends with Naya Rivera, you simply can’t,” Chris shared. “Her brilliance and humour were unmatched. Her beauty and talent were otherworldly. She spoke truth to power with poise and fearlessness.”

“She could turn a bad day into a great day with a single remark,” he went on. “She inspired and uplifted people without even trying. Being close to her was both a badge of honour and a suit of armour. Naya was truly one of a kind, and she always will be. Sending all my love to her wonderful family and her beautiful son.”