For the first time E-Challan system is extented to the newly merged district of Khyber Pukhtunkhwa. Among the entire tribal districts, Bajaur is the first district to launch the electronic challan system for the traffic violators. 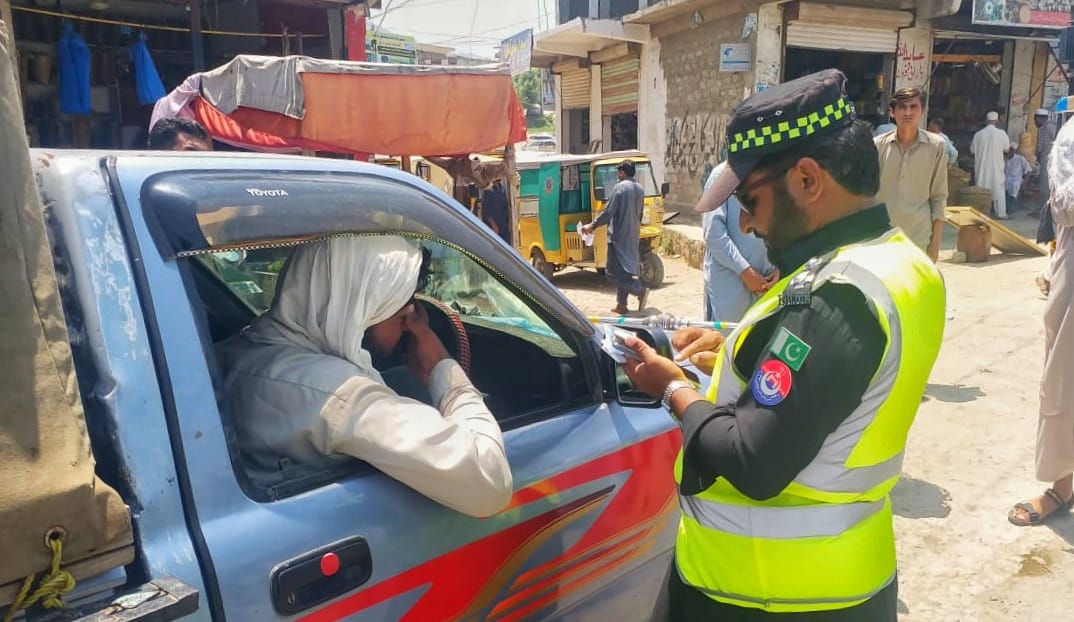 The purpose of digitalization of traffic challan is to deal with the traffic violators in a transparent way in the region.

Rehmanullah is the traffic warden deployed in Khar area of Bajur district of Khyber Pakhtunkhwa. He was wearing black uniform with green waist court, was busy in his newly electronic device arguing with driver to charge him for violating Pakistan traffic rules.

The newly trained traffic warden compared newly imposed E challan system with old notepad challan system said that ” From past so many years we used traffic challan notepad for charging traffic violations which was limited to the deputy commissioner of the area only but now, the newly challan system has been introduced which is online system and link with the main headquarter and banks.

He explained how the online system worked utter that “When we fine someone the violator receives instant message that your credit has been transferred to government safely. It is good because violator also gets satisfied over the process and no doubt of corruption take place”, Ullah added.

Furthermore, he detailed the war effected area said “People are not aware of the new system. They lack knowledge to understand it as they are habitual to the old system. It will take time and eventually people will get to know how much feasible is online system, Ullah added.

He detailed the efforts for awareness thought that “We are making masses aware of the e system and trying to give them general knowledge of it. Previously we would have taken CNIC of the lawbreaker which itself caused lots of problem for masses. Now e challan system has eased people lives”, Ullah concluded

The E Challan system is functional from 16th July, 2020 in the area have collected 120 E-challan till date while the traffic warden preforming 18 to 22 challan per day across district Bajur. However, Eight Traffic Police personnel have completed their training and deployed in Bajaur tribal district of Khyber Pakhtunkhwa.

On contacting to Shahzada Kokab Farooq, the district Police Officer (DPO) to throw light on the E challan system said that few days ago, several weeks long traffic management training course was concluded at Traffic Police Headquarters in capital of Khyber Pakhtunkhwa. On the directions of Khyber Pakhtunkhwa Inspector General of Police Dr Sanaullah Abbasi along with eight policemen from Bajaur attended the training session. The policemen from Bajaur received special training about traffic signals and e-ticketing system.

However, The Peshawar Traffic Police has facilitated while the Information Technology Department provided training to participants with the help of e-ticketing application, Farooq added. He further elaborate about the training session said that the e-ticketing system is a step by the KP Police towards Digital Pakistan which will help people in paying challan through an easy procedure.

Now the people will not need to go to any bank or franchise for submitting challan and it could be paid on the spot. The e-ticketing app has been introduced by the IT Department of KP Traffic Police to facilitate the citizens. However, it is an easy online procedure for submitting challan which will save time and money of people, Farooq added.

Furthermore he elaborated the remarks regarding old challan system “People had a lot of issues regarding challan system which in their opinion was a way to corruption and daily wrong means of earning for traffic police officer. Farooq concluded.

The E system has been initially introduced in four major areas of the Bajour district including headquarter Khar, Inayat Kalli, Sadiqabad and Nawagai. However the system will be soon extended to other bazaars and commercials areas of the district.

Among like many, Gul Zaman Mohamand is the truck driver supplying marble from Bajur to Peshawar. He was unaware to know about the E challan system been imposed. He said that It’s something new for me that now I will pay through online system.

He welcome the move said that “It’s a great step that the violators are paying at the spot and its more satisfying that I do receive text of my payment”. On the other hand he was also concerned that “one thing is bothering me either the officer will justly use the system or they will use to threatened the common citizens.”

However he was pleased with the new system said that “previously whole day used to get wasted in search for CNIC to take it back”. “Sometimes I used to stay in the unknown city just for the sake to take my CNIC back from bank which was problem in itself” Gul Zaman added.