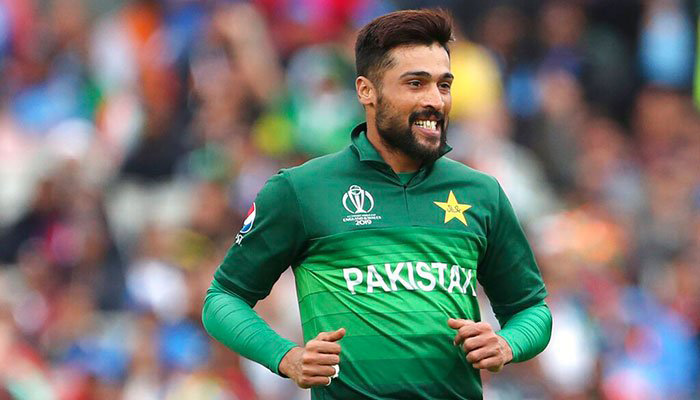 LAHORE: Fast bowler Mohammad Amir, who had initially pulled out of England tour, will join the Pakistan squad following the birth of his second daughter last week, the Pakistan Cricket Board (PCB) said on Monday. The white-ball specialist and masseur Mohammad Imran underwent COVID-19 tests on Monday and they must register two negative results before they can join the squad in England, the board said. “If their first tests return negative, they will be moved to a bio-secure environment in Lahore where their second tests will be conducted on Wednesday, with the expected departures over the weekend,” the PCB said. All-rounder Khushdil Shah will miss the first Test against England with a fractured thumb, the board said on Sunday. Khushdil has been ruled out for up to three weeks after injuring his left thumb while batting during Saturday’s training session in Derby. Team mate Abid Ali also survived a scare after being struck on the helmet while fielding at forward short-leg during an intra-squad match on Sunday. “Abid is absolutely fine and will be available to resume training on Wednesday following Tuesday’s rest day,” team doctor Sohail Saleem said. “He underwent a precautionary CT scan which has also returned normal.” The three-Test series begins in Manchester on Aug. 5, with the last two matches scheduled in Southampton. Beginning on Aug. 28, Pakistan will also play three Twenty20 Internationals against England with Manchester hosting all the matches.

Amir announced the birth of his child on July 17 on social media, allowing chief selector Misbah-ul-Haq to recall him in place of Haris Rauf. Rauf had undergone six Covid-19 tests the last month, out of which five have returned positive. He was due to fly to the UK on Wednesday after this fifth test was found to be negative, only for his sixth test – each player needs two negative results before flying out of Pakistan – to turn out positive. He is asymptomatic and has been advised to self-quarantine for another 10 days before undergoing yet another test. An additional wicket-keeper, Rohail Nazir, will return home, leaving Mohammad Rizwan and Sarfaraz Ahmed as the primary options ahead of the Test and T20 series. Rohail, elevated from the Under 19 circuit, was with the squad as cover when Rizwan tested positive in the initial round of tests last month. Rizwan was later cleared to travel after returning two negative tests. The PCB will also send an additional masseur Mohammad Imran to ease the workload of the team’s regular masseur Malang Ali who, also tested positive twice before finally being cleared to travel earlier this month.