* Conditions this year are entirely different due to ongoing coronavirus pandemic, which has infected millions and changed global lifestyle altogether 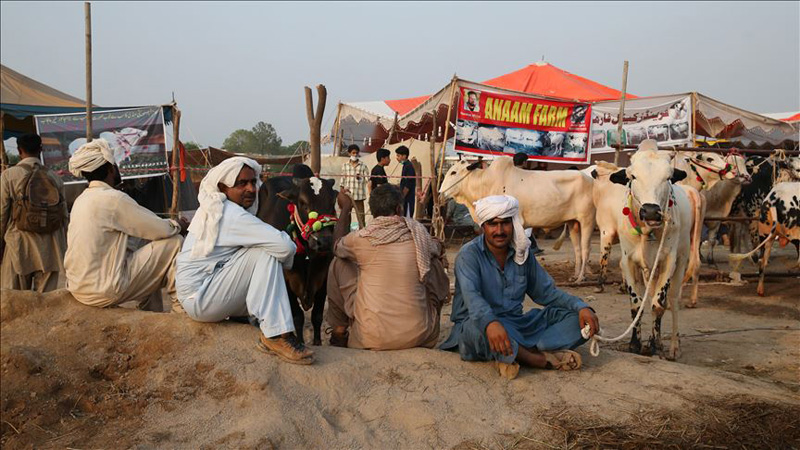 Traffic jams, crowds of buyers, and chants from sellers were the usual scenes at a sprawling makeshift cattle market at the highway that connects the port city of Karachi to the rest of the country, ahead of Eidul Azha.

Traditionally, Karachiites visit the Sohrab Goth Maweshi Mandi – claimed as Asia’s largest cattle market – to buy the animals of their choice to sacrifice on Eidul Azha which takes place between the 10th and 13th of the Islamic month of Zil Haj.

Pakistan is expected to start celebrating the Eid on July 31, subject to the sighting of the moon.

During the Eidul Azha holiday, Muslims across the world slaughter sacrificial animals and distribute part of the meat to the poor.

But the conditions this year are entirely different due to the ongoing coronavirus pandemic, which has infected millions and changed the global lifestyle altogether.

“We expect a 50% fall in the number of buyers this year, mainly because of the coronavirus fallout,” Zaki Abro, an organizer of the cattle market in Karachi, told Anadolu Agency.

While citizens’ purchasing power has fallen due to virus restrictions, he said, sellers, on the contrary, want to make up for the losses they have incurred during the months-long lockdown, leading to a significant increase in animal prices.

“There is no shortage of animals. A higher number of cattle are available this year but the problem is the lack of ability to buy,” Abro said, adding that sales are also likely to drop by half compared to last year.

Marking the willingness of Prophet Ibrahim to sacrifice his son on Allah’s command, financially-able Muslims slaughter animals such as cows, sheep and goats. The meat is then shared among family and friends, and also donated to the poor.

Platforms providing online buying and sacrificial services have existed in Pakistan for years. However, the pandemic situation coupled with new restrictions have increased their popularity by manifold this year.

Unlike in the past, authorities have banned the setting up of small makeshift cattle markets within cities, and slaughter of animals in open spaces, fearing a spike in a relatively dwindling virus infection ratio, is also prohibited.

Taking advantage, scores of meat brands, and cattle farm owners have launched websites offering citizens “manageable,” and “convenient” ways of sacrificing cattle. So much so, several companies are providing online sacrifice services to overseas Pakistanis, mainly in the US and Europe, as well.

“A majority of them will simply collect the meat on the first, second, and third day of Eid as per their booking. Few have bought animals that we will deliver on their doorstep before Eid,” he said.

Most of the orders, he added, had been received from big cities like Karachi, Lahore, Islamabad and Peshawar.

With the virus being highly contagious, people have been advised to avoid large crowds.

Even though many are visiting the markets to buy animals after inspecting them physically, things have changed.

Aamir Hussain, a Karachi-based system developer, would usually bring goats home a week before Eid as his children enjoy taking care of them. But not this time.

“I have booked qurbani [sacrifice] through an online website this year as I am not comfortable with the idea of exposing myself by visiting the cattle market, and slaughtering the cattle outside my house,” he told Anadolu Agency. “I am not going to do that this time. It will be too risky for myself, and my family.”

While goats and sheep each are counted as one, the larger ones like cows and camels have seven shares per animal, according to Islamic law.

The welfare organizations take the share, buy the animals, engage the butchers, complete the sacrifice and distribute meat to each shareholder as per agreed weight.

The Al-Khidmat Foundation and the Edhi Foundation, Pakistan’s two largest charities, have booked thousands of such orders.

In this way, they get to keep the hides, which sell for cash, one of their sources of income.

According to Faisal Edhi, the head of Edhi Foundation-founded by his father and renowned social worker Abdul Sattar Edhi, the charity has so far received 4,000 sacrifice orders in Karachi and Islamabad.

Tabassum Jafri, a senior official of Al-Khidmat Foundation, which is also arranging sacrifice of cattle for Rohingya refugees in Bangladesh and Syrian refugees in Turkey, told Anadolu Agency that they were expecting a 20% increase in the number of bookings this year.

The charity, he said, sacrificed over 65,000 cattle on Eidul Azha last year.

“Our prices are 15% to 20% cheaper as we don’t make profits and buy the animals in bulk. Our only profit is from the sale of hides,” he said.

These charities also distribute meat among the poor and Afghan refugees in Pakistan.

Health experts have warned that despite a downhill trend in virus cases in the past few weeks, the threat is not over.

They have cautioned that the forthcoming festival would be “crucial” to the country’s anti-virus strategy.

The number of cases shot up exponentially after the government relaxed lockdown restrictions in May on the eve of Eidul Fitr.