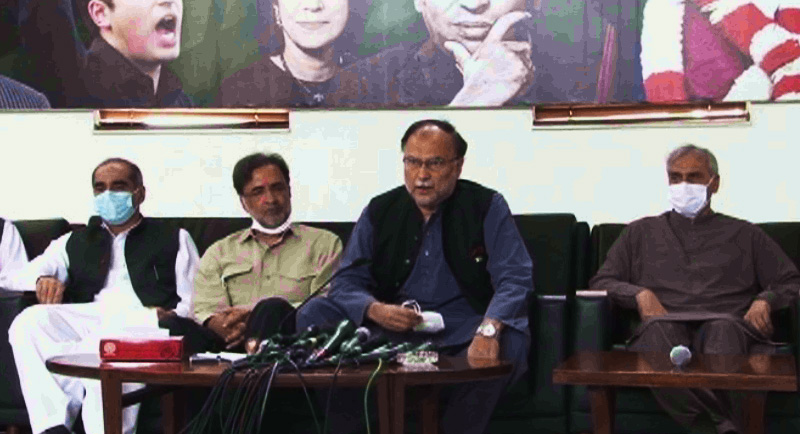 The Pakistan People’s Party (PPP) and the Pakistan Muslim League-Nawaz (PML-N) announced on Monday to call an all-parties conference (APC) immediately after upcoming Eid to devise a joint strategy against the sitting government.

During a press conference after a meeting between PPP chief Bilawal Bhutto Zardari and a three-member PML-N delegation at Bilawal House, Lahore, PPP leader Qamar Zaman Kaira and PML-N’s Ahsan Iqbal said that a joint opposition coordination committee meeting will be held this week and after consulting all the parties, an APC will be held after Eid. The PML-N delegation included Ahsan Iqbal, Khawaja Saad Rafique and Ayaz Sadiq, while PPP’s Kaira, Chaudhry Manzoor and Hasan Murtaza also attended the meeting.

The two parties announced setting up a joint action committee which will comprise PML-N’s Khawaja Asif, Shahid Khaqan Abbasi, Rana Sanullah, Marriyum Aurangzeb. It will have PPP’s representation in the form of Naveed Qamar, Sherry Rehman, Farhatullah Babar and Nayyar Bukhari. From the ANP, Mian Ifthikar and Ameer Haider Khan Hoti will be part of the committee while Senator Mir Kabeer Shahi from the National Party will also feature in it. The committee will be responsible for coming up with a joint strategy against the government.

Kaira said that previous APCs were focused on forcing the government to make pro-people policies. However, he said, this time focus will be to determine a way to rid the nation from this government. “A very serious and sensitive legislation is about to take place,” he said. “Opposition parties have coordination previously but we need to do more,” he said, adding that ‘comprehensive legislation’ is needed via a joint plan by both parties.

“The opposition feels that Pakistan will face several external and internal dangers [if] this government remains in power,” PML-N’s Ahsan Iqbal said. “[Considering] what is happening in our region, we need internal unity but this government only has a vengeful agenda with which it is disintegrating the country,” he said. “In this situation, the country’s two biggest opposition parties agree that to get rid of this incompetent government will be representative of this country’s 220 million people,” he added.

Ahsan criticised the government for trying to introduce a law that is ‘twice as bad’ as the National Accountability Bureau (NAB) in order to put an end to terror financing and comply with Financial Action Task Force’s (FATF) guidelines. The law, he said, would allow authorities to arrest a suspect for 90 days without getting a remand and the detention can be extended without allowing the suspect to obtain a bail. “FATF members are not telling Pakistan to turn the country into a fascist state through legislation [to stop terror financing],” he said, and added that the move is ‘defaming FATF, the international community and the United Nations’.

The PML-N leader said that while the opposition is in favour of compliance with FATF guidelines, it will not allow the government to curb individual rights and freedom. He accused the government of making people’s lives difficult by pushing them into poverty, throttling the media and isolating the country in the international community.

In response to a question regarding Maryam Nawaz’s participation in the upcoming meetings, Iqbal said that “no one has played as huge a role in public mobilisation than” the former premier’s daughter. He added that she will play her role when it came to public mobilisation.

Ahsan Iqbal said that the PPP and the PML-N are in agreement that the current government is to blame for the economic crisis that Pakistan was going through. “No state in the 21st century can continue to exist with such a floundered economy,” he said, adding that improving the people’s standard of living is out of the question as the government is making life extremely hard for the masses. “The one who had a car, is now [left with] a motorbike. The one who had a motorbike is now walking [due to poor economic conditions]. People cannot afford education for their children. The labourers, the farmers and graduates with degrees are worried,” he added.

He said that Pakistan is facing internal and external threats due to the incumbent government. “Getting rid of this government is in line with the aspirations of the people of Pakistan,” he said. “An all-parties conference will be called immediately after Eid-ul-Azha with consultations of all parties,” he added.