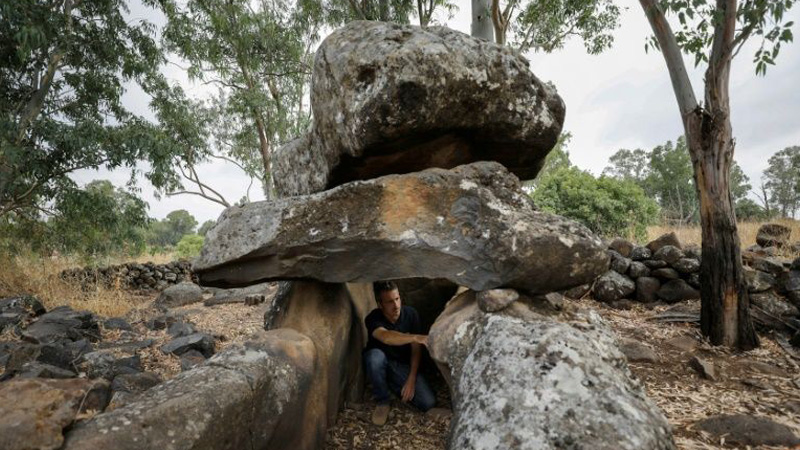 The chance discovery of lines carved into the boulders of an ancient tomb in what is now the Israeli-occupied Golan Heights could offer new insight into an enigmatic culture that thrived thousands of years ago.

In a small clearing in the Yehudiya nature reserve, between yellow weeds and shaded by eucalyptus trees, huge dark basalt boulders and slabs form a small roofed chamber that opens to the east.

The megalithic structure is one of the thousands of so-called dolmens scattered around northern Israel and the wider region, burial tombs erected some 4,000-4,500 years ago in the Intermediate Bronze Era.

Today, on the plateau captured in 1967 from Syria, with Israeli soldiers securing the frontier just 23 kilometres (14 miles) away, scientists seek to shed light on the region’s distant past.

The identity and beliefs of those who built the monuments remain largely unknown. But a recent serendipitous finding of rock art might change that.

About two years ago, “when one of the rangers here in the park walked her daily walk, she looked inside and saw something carved in the walls,” recalled Uri Berger, an archaeologist with the Israel Antiquities Authority.

The ranger contacted the IAA, and “when we looked inside we saw this is not just lines carved or some stains on the wall, this is rock art,” Berger said.

The lines form the shapes of six horned animals of varying sizes, three facing east and three facing west, with two of them — likely a male and female — directly facing each other.

Another horned animal is carved into the interior of one panel, facing the other six. The zoomorphic depictions, hidden in plain sight since study of the dolmens began 200 years ago, were the first to be discovered in the region and a major development for Berger and his research partner, Gonen Sharon.

Sharon, an archaeology professor at the Tel-Hai college in northern Israel, is responsible for a previous landmark discovery.

Just north of the nature reserve, outside the northern Galilee kibbutz Shamir, Sharon was hiking with his children in 2012 on a field with some 400 dolmens spread across it.

Crawling into the shade of the largest monument, Sharon sat down, looked up at the huge slab roof of the dome and said he noticed “weird shapes” that didn’t look like natural formations.

The markings were found to be a series of man-made carvings resembling tridents.

“It turned out this was the first artwork done in the context of dolmens in the Middle East,” Sharon said.

The Shamir carvings, unnoticed by generations of researchers, reinvigorated archeological study in the area.

One of the sites revisited was inside an industrial zone near Kiryat Shmona, a town northwest of Shamir, where three small megalithic structures that survived the zone’s development a few decades ago are surrounded by circles of stones.

On the relatively rounded capstone of the largest dolmen there, two sets of short parallel lines are carved into each side of the rock, with a longer line carved below creating the image of closed eyes and a grimacing mouth facing the sky.

“The grooves don’t seem to be functional,” said Sharon. “To us they look like a face.”

‘Letter from the past’

The stone monuments have “altered the landscape” of northern Israel, said Berger.

But their prominence has also made them targets for antiquities theft, which largely stripped remains that could provide clues to their creators.

Small pieces of ceramics, metal spearheads and daggers, bits of jewellery and beads and some bones are found at the sites from time to time, Sharon said. “But it’s very rare to find” anything, and such finds are very scattered.

“We know very little of the actual culture of the people who built them.”

With the discovery of the art carved into the stones, “we can say something that is much more than what we knew for 200 years,” said Berger.

The rock art findings — published in a recent article by Sharon and Berger in the journal Asian Archaeology — display the animal drawings in this ancient culture for the first time, and present the larger pattern of visual presentation in the region.

Berger said the drawings raise new questions about the people who created them.

“Why those animals? Why in these dolmens and not others? What made this one special?”

The slow but steady accumulation of artistic finds brings scholars “closer and closer” to the subjects of their research, “to the civilisation you’re looking to know about,” Berger said. To Sharon, “this is like a letter from the past starting to suggest what was the world of culture and symbolism beyond just building and erecting very large stones.”