No kissing and disinfect the microphone: Japan nightlife sets its virus rules 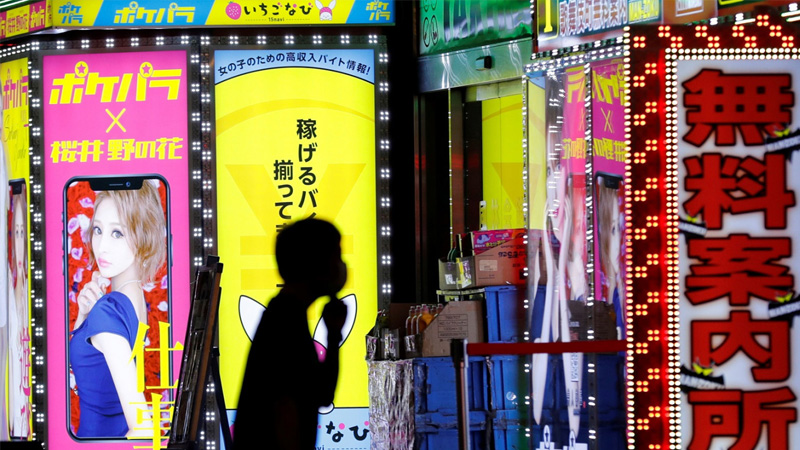 Campaigners for Japan’s nightlife workers say they need realistic guidelines for how to stay safe and remain in business amid the novel coronavirus, which has seen the government zero in on host and hostess bars as centres of contagion.

Bar staff need practical rules on how to interact with customers, said Shinya Iwamuro, a urologist and public health advocate who has been teaching infection control measures in Tokyo’s Shinjuku district and other nightspots.

That means no kissing, no sharing plates and conversation should be at right angles to avoid droplet contamination.

“As much as possible, kiss only with your partner, and avoid deep kissing,” Iwamuro told a news conference, outlining what he described as “kiss etiquette”.

Strategic testing in the nightlife districts of Tokyo has revealed rising daily cases of coronavirus, predominantly among people in their 20s and 30s. The clusters prompted the Tokyo governor to raise the city’s alert to the highest “red” level on July 15.

With cases in Tokyo nearing 300 a day late last week, officials excluded people travelling to and from the capital from a multibillion dollar government campaign aimed at reviving domestic tourism.

The government is also considering toughening its special measures act that allows it to declare a state of emergency. Media reported Chief Cabinet Secretary Yoshihide Suga as saying there may be more spot checks of nightlife businesses.

But concern has grown that nightlife has become a scapegoat for the failure of authorities to track and contain the disease.

Masayuki Saijo, director of virology at the National Institute of Infectious Diseases, said it was not appropriate to discriminate against people based on where or when they work.

“There’s no difference, working at night or working in the day,” Saijo said. “The strategy to reduce human-to-human infection is the same.”

More than a million people are estimated to work in the industry, she said. Her group has drafted its own safety rules for its members, including disinfecting karaoke microphones, as it found government recommendations, such as wearing masks and two-metre social distancing, were impractical, she told reporters.