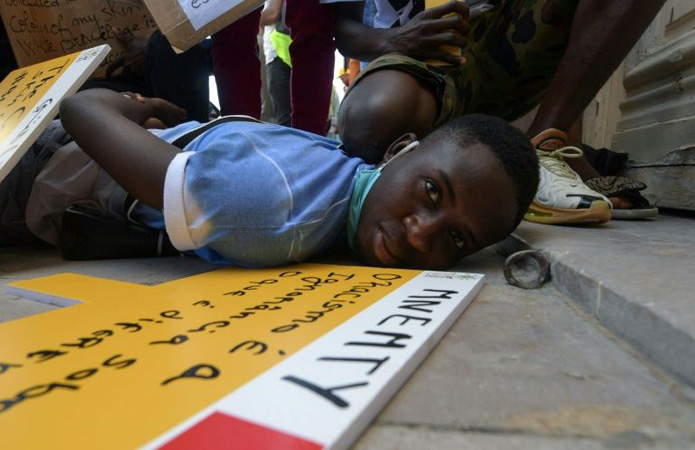 The global wave of anti-racism protests sparked by the US police killing of George Floyd has barely touched North Africa, despite everyday discrimination in a region with a long slave-trading history.

Black citizens in Algeria, Morocco and Tunisia, as well as migrants from sub-Saharan Africa who come to work, study or try to reach Europe, say they suffer endemic day-to-day racism.

“Floyd’s death awakened the anger and rage dormant within us,” said Fabrice, an undocumented Cameroonian in his 40s who lives in Algiers, adding that it twisted “the knife in the wound”.

But the Black Lives Matter (BLM) movement, most observers agree, has not triggered a major debate on racism or police violence against black Africans within the Maghreb region itself.

Only Tunis saw a small demonstration in early June of around 200 locals and foreigners, at the call of the association Mnemty.

The protest was “a message for African Americans from Mother Africa to say ‘We are with you’,” said its leader, Saadia Mosbah, a dark-skinned Tunisian.

In both Morocco and Algeria, however, the BLM movement has generated only a few messages of solidarity online — not enough to challenge a long-standing culture of silence about race.

Most often the racism is verbal, but “sometimes words hurt more than being hit,” said Aisha, a woman from Niger who also lives in Algiers.

She said black people often endure slurs such as “kahlouche”, black in Arabic, or “Mamadou”, a common name in West Africa. In the worst cases, they are called “Ebola and now COVID”, she said.

Her seven-year-old son refused to go back to school, Aisha said, after classmates told him “you don’t belong here”.

“We have to wage a permanent struggle against these verbal abuses,” said Algerian sociologist Mohamed Saib Musette. “Some Algerians forget that they themselves are Africans.”

Over the years there have been occasional campaigns that echo the goals of the BLM movement.

In Morocco, a coalition of associations in 2014 launched an anti-racism campaign in support of sub-Saharan migrants with the message “Massmiytich Azzi!”, literally, “Don’t call me a black man”.

After a string of attacks in Tunisia, including a violent assault against an Ivorian woman, Mnemty successfully lobbied parliament into adopting a law against hate speech in October 2018.

And the Algerian parliament followed suit in April 2020, reflecting, according to Musette, the fact that the reality of racism “is there and must be fought”.

Musette said the priority must be to “decondition” children and teach them to avoid derogatory terms for black North Africans, such as “abid” or “oussif”, which literally means “slave”.

Slavery was first formally abolished in the region by Tunisia in 1846. French-colonised Algeria partially followed suit two years later, while Morocco under French mandate only did so in 1922.

Though not representative of the wider region, modern-day slave markets have been reported in war-torn Libya, where desperate migrants suffer horrific abuse at the hands of human traffickers.

In the absence of official data, non-government groups estimate there are more than 200,000 African foreigners in Algeria, and tens of thousands in both Morocco and Tunisia.

Having often arrived in convoys or caravans through the desert, they typically end up working in the informal sector, as cleaners or construction workers, no matter what qualifications they earned in their home countries.

Although they frequently complain of police harassment and violence, and of wider xenophobia, many are more preoccupied with basic survival — made harder because they lack legal papers and now because of the pandemic lockdowns.

Algeria and Tunisia bar foreign Africans from obtaining residency papers unless they are students.

Only Morocco has exceptionally granted residency rights to some 50,000 people, mostly from West Africa, since 2014. “Without papers, you can’t claim your rights,” said Fabrice, who speaks several languages, holds a law degree and has worked for non-government groups and done odd jobs in Algeria.

He has been unable to settle legally since he left Cameroon 20 years ago to, as he said, “avoid living under a dictatorship”.